Shah Rukh Khan and AbRam are true ‘like father, like son” Jodi as they sport the same tattoo on chest.

Bollywood actor Shah Rukh Khan, the owner of Kolkata Knight Riders, attended his team’s first match of IPL season 10. Like always, SRK was much happy as his little son AbRam made his appearance in the stadium with his dearest dad. The father-son duo were seen cheering their team in the stands.

The match took place yesterday between Gujarat Lions and Kolkata Knight Riders at Rajkot stadium. Amid the interesting match where KKRK won against Gujarat, our eyes caught attention on AbRam’s tattoo. Ys, AbRam was seen sporting the same tattoo like his father SRK from Imtiaz Ali’s next.

SRK took to twitter and shared a picture of him with AbRam from yesterday’s match and that sees their same tattoo. He wrote, “Punjab se Gujarat…only Pyaar…#AmiKKR. Awesome@gautamgambhir55 , #ChrisLynn, my@kkriders boys & Venky Mysore. Thanks Rajkot. 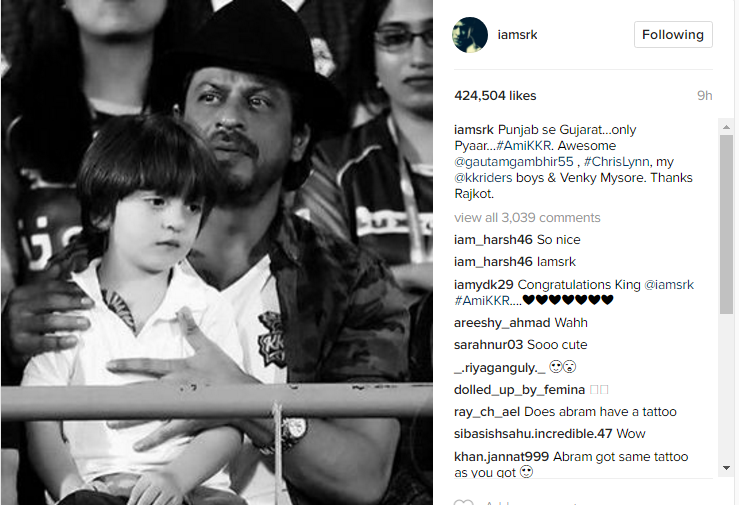 On the work front, Shah Rukh Khan will be next seen opposite Anushka Sharma in Imtiaz Ali’s untitled next. The film will release this year on August 11.

Check out more pictures of Shah Rukh Khan and AbRam from yesterday’s KKR Vs Gujarat match:

The #King and his lil #Prince are in the house… I don’t even know how to describe how #cool they are and how much I #love them !?? (#SRK with #AbRam at #KKR match) !? | @iamsrk | – #Mr #Charisma #PerfectionPersonified #MyAngle #MyReasonToSmile #MyReasonToLive !❤

King Khan and Prince #AbRam cheering for #KKR at #GLvKKR match in Rajkot.