There is no denying that Bollywood celebrities and media go hand in hand. Celebrities need media for their films and at every step on the professional level. Besides, they even share a cordial relationship with the media people. However, sometimes things get bitter when these Bollywood stars are dragged into unnecessary controversies, fake news, or for something which is not true, eventually creating a bitter relationship between media and stars. If you’re a celebrity, your personal life is at the stake. Even when they try to keep their life under wraps, hunger for headlines hit them in some or other way.

Most of the genuine media houses stick to facts and reliable sources, but there are many who believe unnecessarily in sensationalizing the stuff or even create some fake stories. Well, daily numbers of stories go online that includes gossips, bogus stories, the source quoted stories (couldn’t figure out till date who are those sources) and a lot more from the Bollywood world. But at the end, who are the victims of all these? Of course stars! Why? Because they are stars! The recent classic example is how Virat Kohli is being involved in Anushka’s upcoming film Phillauri.

There have been many times that Bollywood celebrities have expressed their disappointment and anger on the fake stories. The recent target was none other than Anushka Sharma and her reaction to the same is valid. So, as we all know her upcoming film ‘Phillauri’ under her production banner, is currently a talk of the town. The trailer of the film has been well received by the audience but keeping all those appreciation aside, some media houses reported the involvement of Virat Kohli in the film’s production.

When I read this report on a leading daily’s website as an “EXCLUSIVE” article based on their so-called source, it just made me say, “Not done”. Why drag someone who does not belong to the industry and the one who has nothing to do with films? Why drag someone (Virat) who is currently touching new heights with his hard work and amazing performance on the field?

Read how Anushka Sharma has slammed media for the irresponsible journalism and reporting something without confirming with her. A much-needed phase to break the silence. Well said, lady! 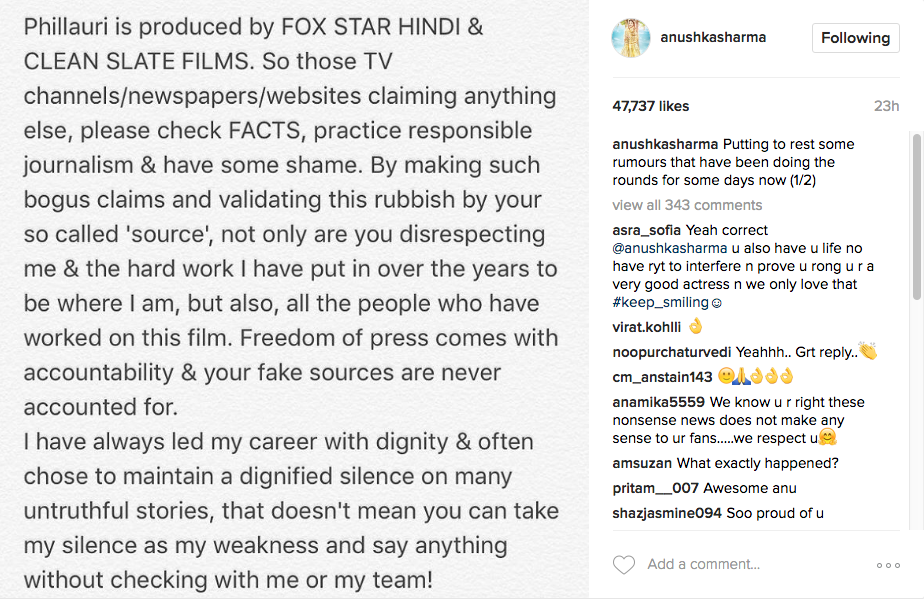 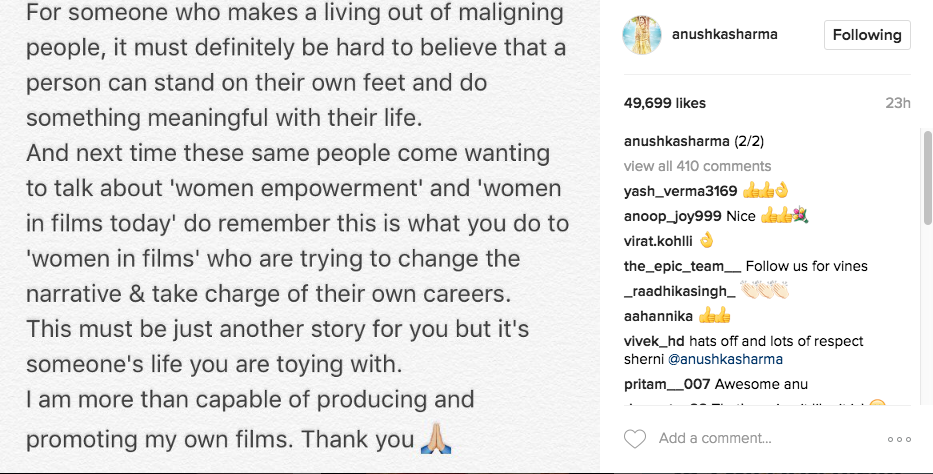