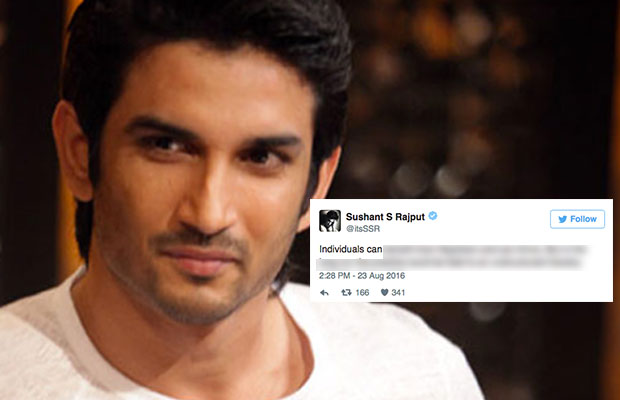 [tps_footer]Sushant Singh Rajput is hyper-active on his Twitter account. From discussing his films to sharing his thoughts, the Kai Po Che actor uses the micro-blogging site quite effectively. Today, SSR tweeted something strange that caught out attention.

Sushant’s tweet says, ‘Individuals can benefit from Nepotism and can thrive. But in the long run the practice could be fatal to an unstructured industry.’

Well, we kept wondering if is he is talking about nepotism in Bollywood. It’s very clear that Bollywood has always been favourable towards a superstar’s son or a daughter. It also didn’t matter if the person is a good actor or not, sometimes the family and name he has with him are enough to run the film. The nepotism culture in the industry has been going on for decades. Well, it seems like Sushant thinks that if it continues, it is going to prove dangerous to the acting industry.

On the professional front, Sushant has a big release next month. His film, M S Dhoni: The Untold Story, a biopic on Indian Cricket Captain Mahendra Singh Dhoni will be releasing soon. The trailer came out a few weeks ago and looks promising. Sushant has been receiving huge acclaims for his Dhoni’s avatar and some even say he looks like his exact replica. Directed by Neeraj Pandey,  the film will release on September 30. Later, his romantic film, Raabta, also starring Kriti Sanon will release on February 10, 2017.[/tps_footer]