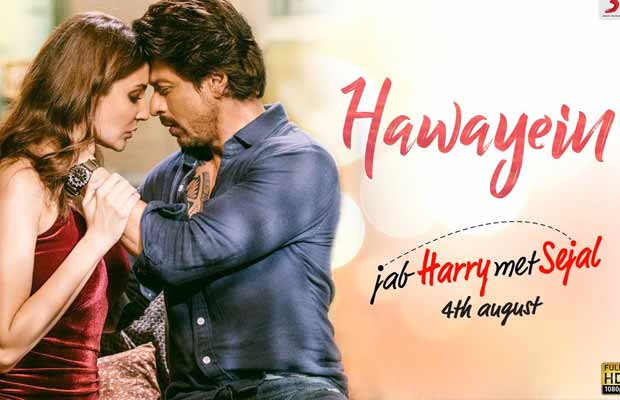 After ‘Raees’, the Bollywood actor Shah Rukh Khan is next going to be seen in the film Jab Harry Met Sejal. Starring Anushka Sharma opposite SRK, the movie is bringing back their pair after ‘Rab Ne Bana Di Jodi’ and ‘Jab Tak Hai Jaan’.

The film has created quite a buzz in the audience. It has impressed everyone with the different way of showing the glimpses of the film. The makers had released several mini-trials which were loved by the audience. Also, the recently released trailer was something that made the fans even more restless for the film.

The songs of the film like ‘Radha’, ‘Beech Beech Mein’, ‘Safar’ and ‘Butterfly’ have been praised immensely by the audience. The music album of the film has already become a hit. And adding to the list is the new song ‘Hawayein’.

After ‘Radha’ was launched amidst the ‘Sejals’ of Ahmedabad, ‘Beech Beech mein’ was launched club crawling in Mumbai, ‘Butterfly’ was launched in the Punjabi frolic, the latest song ‘Hawayein’ has been launched at a Sundowner party in Mumbai.

The beautiful lyrics have been penned down by Irshad Kamil that will touch your soul. The music of the song has been composed by Pritam.

The song is another soothing soft romantic melody by the famous singer Arijit Singh. And just like most of the romantic hits, this song is also expected to be among the top ones in the charts!