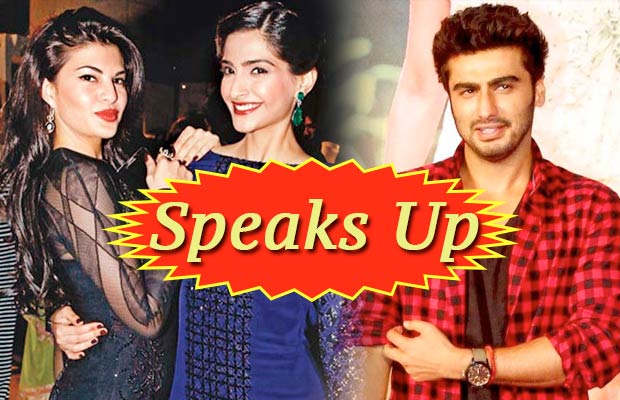 [tps_footer]2016 has proved to be the most controversial year so far and no one can deny this if you are aware of the latest happenings in and around the entertainment world. Right from suicide cases of Pratyusha Banerjee, Jiah Khan to divorce cases like Karisma Kapoor-Sunjay Kapur, disapproval and objections of various people on the selection of Bollywood heartthrob Salman Khan as the Brand Ambassador of Rio Olympics 2016, Hrithik Roshan-Kangana Ranaut legal war and now we have Kick actress Jacqueline Fernandez with us who has opened up about her relationship with Ishaqzaade Arjun Kapoor and Jacqueline is a BFF of Sonam Kapoor who has introduced these two young stars in Bollywood.

Jacqueline Fernandez said she is a very close friend of Sonam Kapoor and Sonam knows everyone in our Bollywood right from her childhood, yes that’s the privilege of taking birth in a star-studded family you already have contacts with the biggies of B-Town. But, Jacqueline denied Sonam trying to set her up with her cousin brother Arjun Kapoor, Jacqueline rubbished their link-up news as a baseless rumour saying that if they party together and are spotted at the same events doesn’t mean they are in a relationship. She said it’s just the relation of friendship between her and Arjun and they laugh together on their linkup stories and breakup news too.

Well, honestly even we don’t know where these link-up stories come from but nothing will be said or reported without any proofs and Arjun Kapoor has been constantly linked-up with Hero actress Athiya Shetty and Salman Khan‘s Bhabhi-Jaan Malaika Arora Khan who has fixed her mind to move out of her marriage with Arbaaz Khan. But again, according to Arjun, these are just media created rumours and he is single but then why his name gets linked to Athiya, Malaika and Jacqueline only?[/tps_footer]