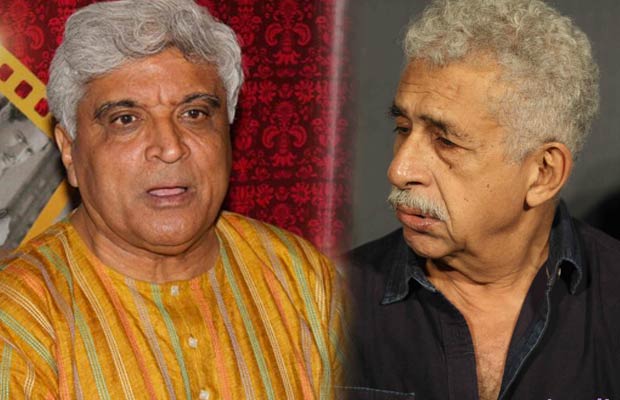 [tps_footer]Naseeruddin Shah who has always been in the limelight for his credible performances is now in the news for his war of words. The mind blowing actor landed in a hassle when he commented about late superstar Rajesh Khanna. Shah commented that Rajesh Khanna was the reason behind the mediocrity in the industry. Renowned writer Javed Akhtar has now lashed out at Naseeruddin Shah.

Seems like, the war of words is not settled even now. Rajesh Khanna’s daughter Twinkle Khanna slammed the Ishqiya actor. Finally, Akshay Kumar tried to calm down the matter when he said that no further discussion about this will now take place. Moreover, Shah also apologized for his comment.

The controversy has still not faded out and Javed Akhtar has now bashed Naseeruddin Shah in a harsh way. Akhtar was present at a poetry festival recently and he openly made a drastic comment about the Dedh Ishqiya actor.

Javed Akhtar stated, “It’s simple – Naseeruddin Shah does not like successful people. I have never heard him praise any successful person. He criticises Dilip Kumar; he criticises Amitabh Bachchan.”

Seems like, the highly talented lyricist is not very happy with Shah’s recent comments about Rajesh Khanna. With all the legends fighting a war of words we hope that this controversy soon sees an end.