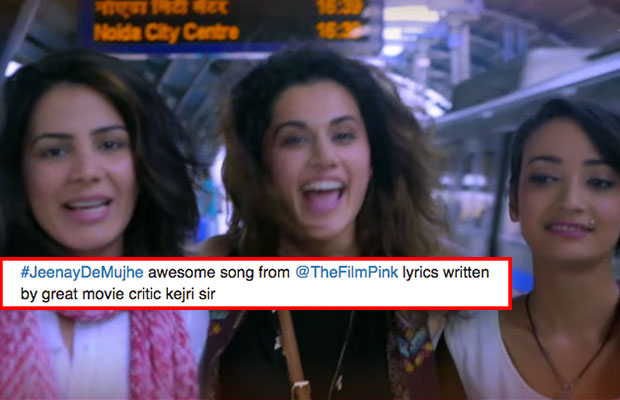 The film Pink stars Amitabh Bachchan, Tapsee Pannu, Kirti Kulhari, and Andrea Tariang in titular roles. Directed by Aniruddha Roy Chowdhury, the trailer left everyone astonished. The trailer is quite thrilling and takes one’s breath away. The film will release on September 16.

Today, the first song Jeenay De Mujhe from the film came out. This energetic number is crooned by singer Faiza Mujahid. The song is catchy and is all set to become a girl anthem of the year.

Faiza Mujahid herself composed the song and penned the lyrics. As soon as the song was out, it started trending on the Twitter. Here’s how Twitter reacted to the song Jeenay De Mujhe:

Society makes it hard 4 me 2 live & touch my dreams but it cant refrain me from being who i want 2 be!#JeenaydeMujhe https://t.co/JVNxJ9a0g3