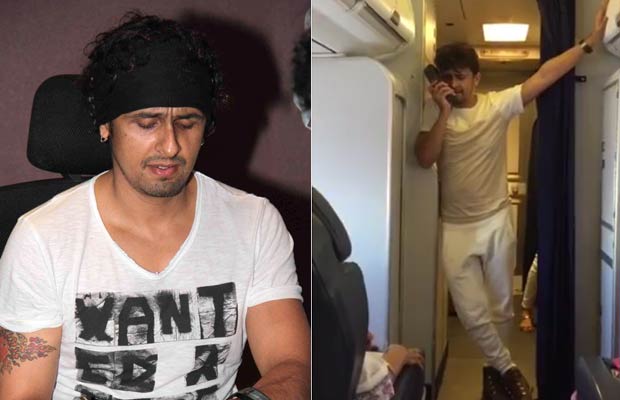 [tps_footer]Sonu Nigam stole all the limelight when he performed on the flight for the passengers. The artist who is humble to the core never disappoints his fans. Seems like, this good deed on the part of the artist has become a hassle for the crew of the Jet Airways. According to reports, the crew of the Jet Airways is now being suspended for allowing the impromptu performance.

According to reports, the passengers on the flight were acquaintances and the moment they noticed Sonu Nigam in the flight they pleased him to sing a few songs for them. Many passengers also recorded the performance in their phones and the footage made waves on the social networking sites.

The crooning session went on for a while and all the passengers seemed to have a good time. Singer Sonu Nigam also interacted with a few passengers. However, less did they know that their happy moments would prove to be a trouble maker for the five airhostesses.

Directorate General of Civil Aviation has now taken a serious call on the indiscipline in the flight. The matter is all the more serious now because the in-flight announcement system was misused by the passenger which is against the norms and rules. The authorities have now decided to suspend the airhostesses who were on board.

Misuse of the in-flight announcement system is a strict no no and the on board crew must rectify if something of that sort happens. Well, we are sure that Sonu’s performance is proving to be a nightmare for the crew of Jet Airways!

Sonu Nigam’s Spontaneous Performance For Flight PassengersMissMalini Exclusive: Sonu Nigam recently surprised all the travellers on a flight when he went up to the in-flight intercom and started performing some of his best songs for them! They were definitely surprised! 🙂

Posted by MissMalini on Tuesday, 19 January 2016

Sonu Nigam Surprises Passengers With Impromptu PerformanceSonu Nigam recently surprised all the travellers on a flight when he went up to the in-flight intercom and started performing some of his best songs for them! They were definitely surprised 🙂

Posted by MissMalini on Tuesday, 19 January 2016