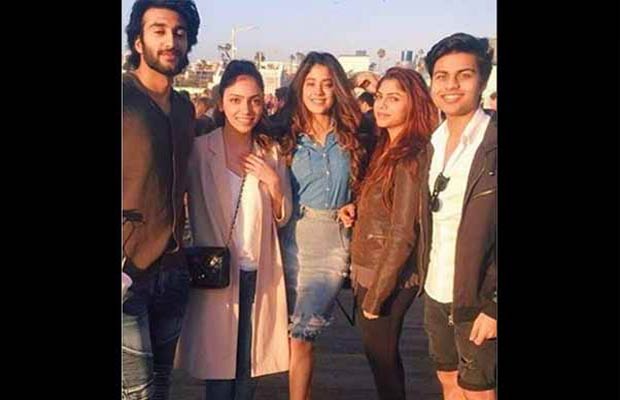 [tps_footer]Jhanvi Kapoor, being the eldest daughter of phenomenal actor Sridevi who has rocked the south and Hindi film industry with her amazing and energetic performances, it’s expected to see her daughter to make a debut soon follow her superstar mommy Sridevi‘s footsteps.

A spark of life that Sridevi has managed to bring on the silver screen, honestly very few actors have been able to maintain it like her, that spark and passion for movies is also seen in Sridevi‘s, once upon a time rivals Madhuri, Juhi Chawla and many more but no one could replace her and other than Kajol in Fanah starring Aamir Khan, no other heroine has received a tremendous successful comeback movie like Sridevi‘s English Vinglish. But successfully, most of our yesteryear’s actors have made a mark and have made a place for themselves in the bollywood and in the hearts of their fans too.

Now, it’s time for their kids to continue the legacy. It may be easier for star kids to make a way in B-town as their parents and family members are there to support them but they even face tons of comparisons and expectations from audiences worldwide.

It’s been in the news about Jhanvi trying to make a career in bollywood but she has not finalized anything to start with, yet. She has been spotted at various event with her mom Sridevi and the speculations of her making a debut is always in the news and highly anticipated.

It was reported by a leading portal that, “Jhanvi and Khushi are now taking lessons and tips about acting, dancing and all those things which need in a Light-Camera-Action career. Sridevi is providing coaching of acting and dance to both girls. Following her mother, Jhanvi Kapoor is setting up her filmy career in a Telugu flick. She will be the heroine of Akhil, son of South Indian film star Nagarjuna. After growing her skills and maturity she will try her luck in Bollywood like her mother.”

Don’t know exactly when that will be happening but we certainly know that Jhanvi is currently said to be preparing for her acting career at the The Lee Strasberg Theatre & Film Institute in Los Angeles. There is a recent beautiful snap of this Teenage Style Icon, where Jhanvi is looking really beautiful and surely knows how to give a perfect pose for the shutter bug.

We hope she makes her parents proud by her acting skills in a successful debut movie soon !![/tps_footer]