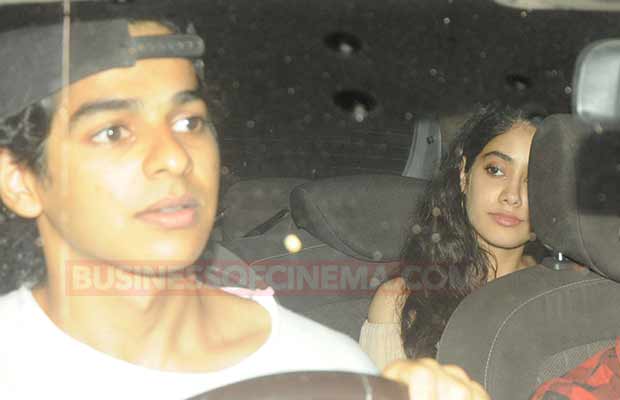 Jhanvi Kapoor and Ishaan Khattar arrive at the Baywatch screening together.

Jhanvi Kapoor is in the news for various reasons these days one of them being her link up with Ishaan Khattar. Jhanvi, Sridevi’s daughter is a party girl and loves to hang out with Bollywood biggies. Many times, she has been spotted attending Karan Johar’s party.

Priyanka Chopra starrer Baywatch screening was held in Mumbai on Monday. Jhanvi Kapoor and Ishaan Khattar arrived in the same car. Ishaan drove the car himself. The two were accompanied by a friend.

Jhanvi Kapoor was seen at Karan Johar’s party. She clicked pictures with Sara Ali Khan and Manish Malhotra. She had worn an off shoulder dress with subtle makeup. Off shoulder, dresses seem to keep her comfortable as she wears it really often.

Jhanvi is being spotted often with Ishaan Khattar. This is also the reason as to why Shahid Kapoor is upset with his little brother. Shahid wants Ishaan to focus on his career and keep away from all other publicity. Like a guide and mentor, Shahid has sternly advised Ishaan to maintain a low-key about his personal life and not be seen with Jhanvi publically until his debut film releases. He has strictly asked Ishaan to pay attention to his career ONLY.

Fans of Jhanvi Kapoor and Ishaan Khattar would like to see the two work together in a film. There were rumours a few months back, about Ishaan and Jhanvi being cast together in Sairat. It would be exciting if the rumours are true.