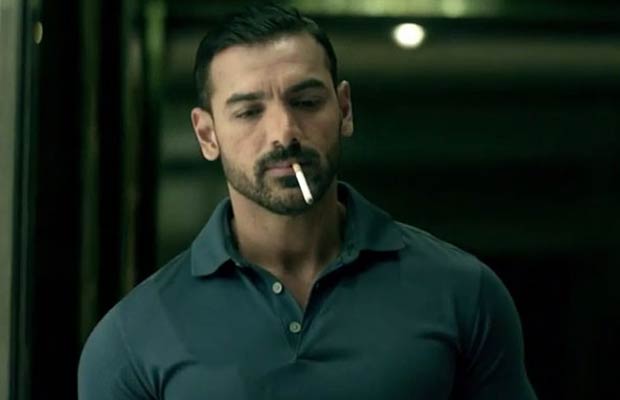 [tps_footer]John Abraham starrer Dishoom has been garnering loads of accolades and there has been tremendous excitement around the movie’s release.

When you think of John Abraham, all we can recall is a hot body sweltering in some power packed action and those monstrous bikes!

Dhoom was one movie which gave us all three in a thrilling mix!
His character in the movie Kabir had become a rage and has been engraved in our memories ever since.

It was John Abraham who got an adrenaline rush with his onscreen character Kabir leaving the ladies swooning over the hard-to-hate villain John played.

With Dishoom’s release around the corner, promising some high octane action sequences, interestingly John’s character is named Kabir in Sajid Nadiadwala’s Dishoom too!

With that charming persona and daredevil looks combined with action being the genre of the film, doubled with bikes.. John Abraham is sure to recreate magic onscreen.

Dishoom will see John undertaking some breathtaking action sequences which would not only be high up in the air but also low down in the water!

Dishoom will also have John partake in Bollywood’s longest and the most expensive chase sequence ever shot!

John along with his co-star Varun Dhawan promises some never seen before stunts. If you thought that Dhoom was some thrilling action you saw, wait up and get ready to Dishoom!

The film’s trailer has been garnering an overwhelming response with the songs turning to be instant chartbusters, all content from the film is taking audience anticipation for the film’s release notches high.

Dishoom is directed by Rohit Dhawan and is all set to hit the silver screen on 29th July.[/tps_footer]