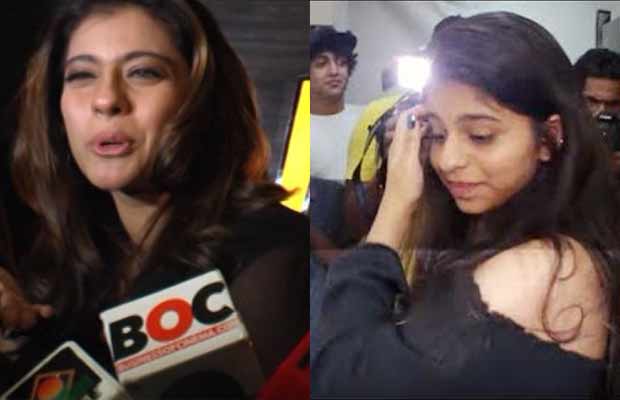 The ‘My Name is Khan’ actress Kajol Devgn has worked for over 12 years in the Bollywood industry and has a wide range of films under her name.

Kajol admitted that while she understands her kids are born into this life, she doesn’t force them to choose this way of living. The ‘Dilwale’ actress shared her thoughts on the issue saying that she feels angry that her kids have to face the media as well.

Talking to MidDay, recently, the actress feels it is unfair that her kids Nysa and Yug have to face reporters at such a young age.

”We can only protect our kids to a certain extent. I hope I have brought up my kids well enough to handle that pressure. They are born to stars and that is something they can’t change. At the same time, I don’t see the need to expose them unnecessarily.”

She also commented on the recent paparazzi incident with Shah Rukh Khan’s daughter Suhana. Kajol claimed that it is a tough life as a star kid with constant media surveillance on their lives.

She added that it was a case of bullying and if something similar had happened to her kids, she would have been furious. The actress also stated that the her kids didn’t sign up for this and it is bad enough that they are always trying to be normal.

”If something like this were to happen with Nysa or Yug, I’d be infuriated. It’s sad that the Indian paparazzi has reached a stage where it can do this to a kid. What happened with her sounds like bullying to me. We are stars; it’s our job to accept all of that. But to be doing that to someone who is nothing more than an impressionable teenager, is harassing her in plain words. They should be more responsible when it comes to dealing with our kids. We signed up for this, they didn’t.”

The 43 – year old actress and her husband Ajay Devgn agree on this issue. The couple have given freedom to their daughter Nysa to choose whatever she wants to do, be it related to movies or not.

Actor Shah Rukh Khan on a talk show with Rajeev Masand during his movie promotions had spoken on the Suhana incident as well. Shah Rukh understood the perks of his popularity but requested the media to be more polite with their demands. He admitted he doesn’t expect not to be photographed but his family is not keen on it.

He said that he has trained his kids well on how to behave with the media. He also trusts the photographers and media to respect people. The father of three kids has explained to his children on how to deal tactfully with the media. ”Please, can I go now?’ They will all listen to you, I have known them for 25 years.”

Kajol Devgn is busy promoting her new film ‘VIP 2’ with Tamil actor and music director Dhanush. The movie is a bilingual and stars the actress as a tough boss to Dhanush her employee. It is said to be a romantic comedy and is due to release next month.

Watch Video: Shah Rukh Khan REACTS On Suhana Khan Being Harassed By Media At A Event