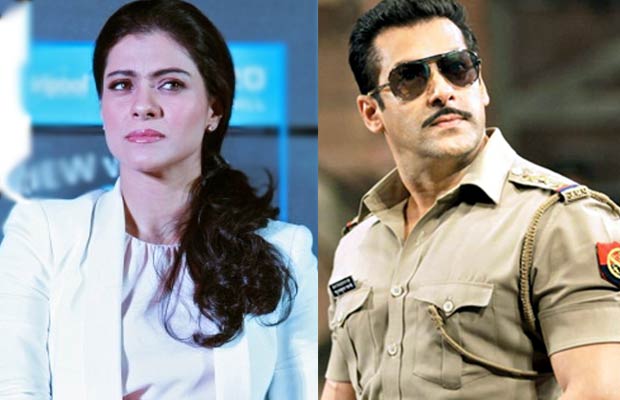 [tps_footer]Salman Khan is stealing all the limelight for the third installment of the film ‘Dabangg’. After the two successful prequels, the third part of the super hit film will soon go on floors. The makers of the film have a greater responsibility now with ‘Dabangg 3′. The film is all in the news for Sonakshi Sinha not being a part of it.

Reports state that Sonakshi Sinha who has been the leading lady in both the Dabangg films will not be cast in the third part. Apparently, things are not going too positive between Sona and Salman and hence the makers have shown Sonakshi the good bye door. The leading lady of the film is not yet finalized but a surprising update is now out.

Speculations making rounds state that Arbaaz Khan has approached Kajol for starring in ‘Dabangg 3′ as a villain. Kajol was last seen in the film ‘Dilwale’ opposite Shah Rukh Khan. The expressive actress who is known for rejecting films has not signed any movie after ‘Dilwale’.

Well, it is said that Kajol has said a no to ‘Dabangg 3′! The mind blowing starlet wanted a more important role in the film than just of a villain. Due to the same, she rejected the film. No confirmation on this latest update is yet made.

Well, it would have been a delight to witness Salman and Kajol on the silver screen after ages. Currently, ‘Dabangg 3′ is in the pre-production stage as Salman Khan is busy with Kabir Khan’s ‘Tubelight’.