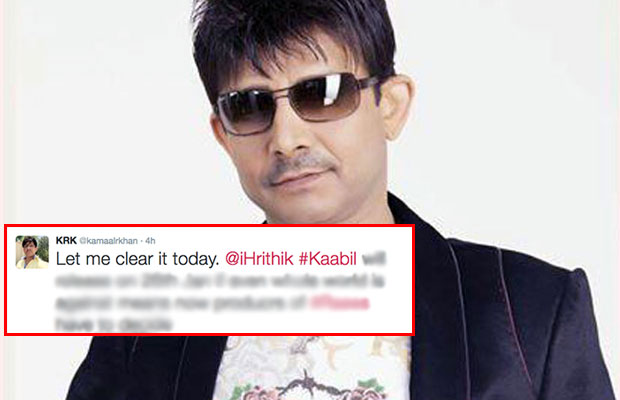 [tps_footer]Actor and self-proclaimed movie critic Kamaal R Khan is back with his golden words on Raees and Kaabil’s box office clash. Shah Rukh Khan will play a protagonist in Raees. The film will clash with Hrithik Roshan’s much-awaited Kaabil. Well, this clash has made many headlines and even KRK have figured out something unusual about it.

The Deshdrohi actor took to his Twitter to share his views on the clash. His first tweet says, ‘Let me clear it today. @iHrithik #Kaabil will release on 26th Jan if even whole world is against means now producers of #Raees have to decide.’

In his next tweet, he again took a dig at Raees, ‘#Raees music is on @ZeeMusicCompany n #Kaabil music is on @TSeries so Bhushan Kumar will fire his all bullets to kill #Raees music.’

Well, apart from SRK-Hrithik pitting against each other, KRK found out how even the music companies will also compete. We must say, KRK made a good use of his brain to give out an important news about the clash.

Along with SRK, Raees also stars Nawazuddin Siddiqui and actress Mahira Khan in a pivotal role. Directed by Rahul Dholakia, it is made under Excel Entertainment banner. Well, wondrous actress Sunny Leone is also performing an item song in the film.

On the other hand, Kaabil stars Yami Gautam opposite Hrithik. Directed Sanjay Gupta is directing this film, whereas it is Rakesh Roshan is the producer.

Raees and Kaabil will hit the silver screen on January 26, 2017.[/tps_footer]