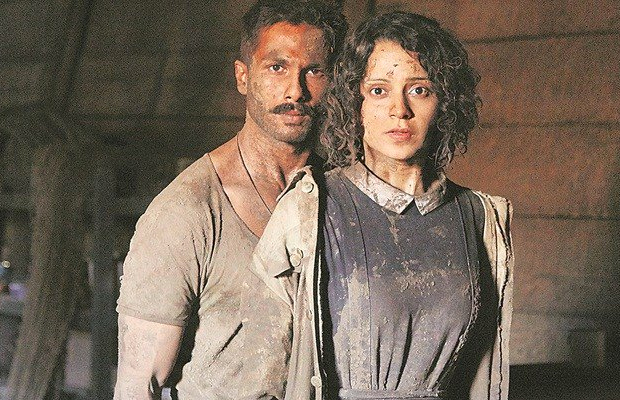 Bollywood actress Kangana Ranaut is leaving no stone unturned for the promotions of her upcoming film, Rangoon that also stars Shahid Kapoor and Saif Ali Khan in the lead roles. The Queen actress is seen giving back to back interviews and is visiting places for the promotions. Amid everything, gossip mills are abuzz with news of a cold war between Kangana Ranaut and Shahid Kapoor that they had during the shooting of the film. However, the actress has rubbished the rumours.

In a recent interview, Kangana revealed that the only problem she had with Shahid was when they had to share a cottage during the Arunachal Pradesh schedule. She revealed that Shahid used to play loud hip-hop music every morning and that she was fed up with it and immediately wanted to shift the room. She addressed her stay with Shahid as a “nightmare’.

Well, Shahid and Kangana share quite a few intimate scenes in the film and those have actually become a talk of the town. While the steamy kissing scenes shown in the trailer of the film are grabbing all the eyeballs, Kangana revealed that kissing Shahid was a tragedy for her. In her interview, she was quoted saying,”I don’t like intimate scenes in a film. They are the most difficult to shoot. You have a formal equation with someone and suddenly you are into each other’s mouth.”

Further, she shared her experience kissing Shahid and said, “That big mustache of Shahid is horrible. It was such a tragedy of different level. When I asked him about it, he said he applies wax and has a running nose. It was getting messy and he was teasing me. I have intimate scenes with Saif too, but they aren’t that many.”

With so many tragedies with Shahid Kapoor, we wonder what would be Sasha’s reaction to all these. Rangoon directed by Vishal Bhardwaj is releasing on February 24th.