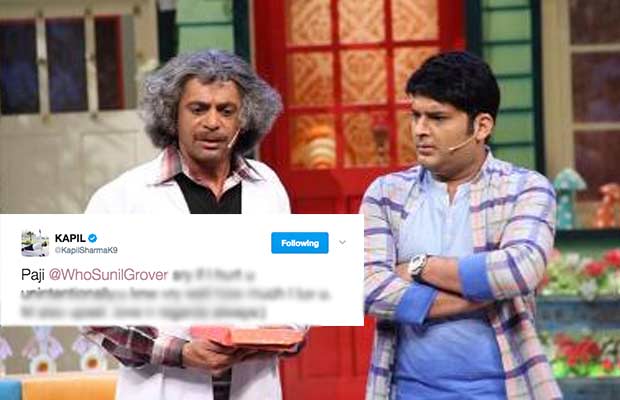 On Saturday morning, comedian Kapil Sharma surprised everyone by introducing his ladylove to the world through twitter. Making his relationship official, Kapil shared a photo of him with his girlfriend Ginni on twitter. A few hours later, the comedian star was in the news for all the wrong reasons. As reported earlier, after performing a stage show in Australia, Kapil and his team members were returning to India last.

While returning from Australia to India, an incident took place between Kapil and Sunil Grover in the flight. Reportedly, Sunil was seated on his seat and Kapil suddenly walked up to him and allegedly started abusing and humiliating his friend. He started abusing on the top of his voice and soon passengers and other Kapil Sharma’s companion gathered to see what happened.

Reportedly, Kapil was drunk and this was the reason of his ill manner. However, Sunil Grover could not take this and he got into an argument. The two had a heated argument on the flight.  Reportedly, Sunil Grover has decided to quit the comedian’s show after the shocking incident. However, there is no confirmation on the same yet.

Sunil Grover, who plays Dr. Mashoor Gulati  on The Kapil Sharma Show, has totally avoided to respond to the matter while Kapil Sharma has finally broke the silence. He took to Facebook and wrote a long post mentioning that he and Sunil would sort the issue. He also mentioned that media should not interfere as he and Sunil keep fighting with each other.

Kapil also says that this was the first time he shouted at Sunil in 5 years and still loves him as a family. The actor also made sure to promote his movie ‘Firangi’ while speaking about the issue.

Hi.. good morning friends .. was celebrating my best time n suddenly I heard a news about me n sunil paji fighting.. first of all see where it is coming from.. what r the intentions behind this.. if I fought with him in the flight then who saw it n informed u.. is he trustworthy..? Some people enjoy these kind of stuff.. we eat together .. we travel together.. I meet my brother once in a year.. n spending almost everyday with my team.. specially sunil .. I love him.. I respect him.. yes I had a argue with him.but r we not normal people..?I shouted at him first time in 5 years .. itna to chalta hai bhai. we will sit n talk that where is the problem.. I love him as a artist as a human being.. he is like my elder brother.. why so much negativity all the time.. I respect our media.. there r some other serious issues which we need to focus. Is me n sunil’s issue is so important n realted with the security of my country ..? We spend a lot of time together rather then our families .. n sometime it happens in family.. its our family matter.. we will sort this out.. zyada maze mat liya karoo. OK now m tired typing .. n one more thing.. I m going for the final schedule of Firangi. Hahahahaha.. sorry again promotion.. thank u so much for ur love n blessings… keep smiling n stay happy always :)) love u all

Paji @WhoSunilGrover sry if I hurt u unintentionally.u knw vry well how much I luv u. M also upset .love n regards always:)