Former filmmaker Karan Johar has been trolled earlier on twitter as well, and he has ignored them as much as possible, but this time he is burning like fire and wouldn’t tolerate anything.

Karan Johar showed his anger on twitter itself when someone called him a ‘chakka’ very professionally.

The random social media user commented on his video, where Karan was being interviewed by a journalist and he commented something that was shocking and very rude. To which Karan did not show any ignorance and straight away shut his mouth.

The man commented, “So chakka is interviewing another chakka.” To which Karan got so offended that he decided to respond ASAP. He said, ’ A very happy Sunday to you….I hope you recover quickly….Don’t forget your medicines! Also, make sure you gargle…’ This guy surely spoiled Karan Johar’s Sunday. See here: 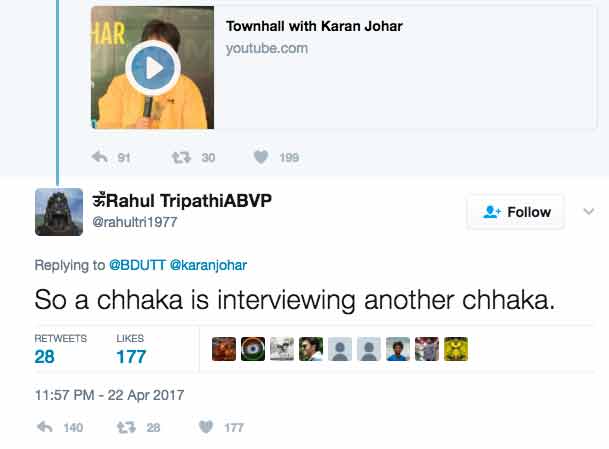 He is not being targeted for the first time over here and we are pretty sure, he can’t handle such nuisance is the reason why he called it off. His comeback was blunt and sharp both, we are glad that he is no longer tolerating such things.

In an interview, he had shared that once his twitter was flooded with tweets questioning his sexuality. Why are we so narrow-minded? If someone wants to live their life alone that doesn’t make it a point that, the particular person has to be a gay or a eunuch.

Karan Johar has always been an example for everyone and his works have influenced many. He is a good script writer/director and we think nobody has the right to poke someone so personally.