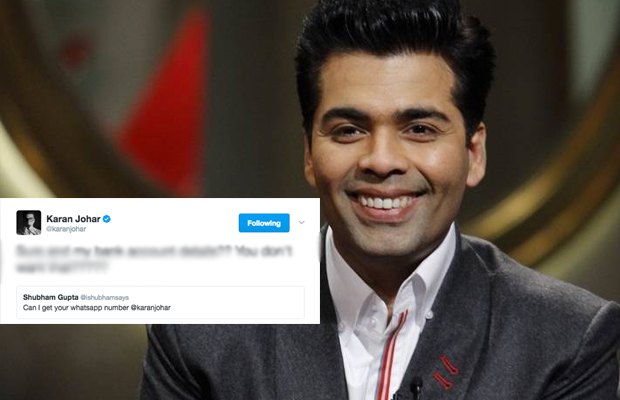 Bollywood filmmaker Karan Johar is very much active on social media but he is not the one who regularly interacts with other users on the public platform. B-town celebrities interact with their fans on regular basis on #Ask session but this time, Karan Johar also took the chance of interacting with his fans. KJo carried #AskKaran session on twitter and tried answering every question of his fans.

Karan, who always gives smart replies, was also humor filled during his fun interaction with twitteratis. One of the users asked Karan for his mobile number and our witty actor replied in the most epic manner. Just when the fan asked KJo for his number, this is what he replied, “Sure and my bank account details?? You don’t want that?????”

Besides, a twitter user also asked Karan about the casting of his next film ‘Student of the Year 2’. While reports are doing rounds that Saif Ali Khan’s daughter Sara Ali Khan has been confirmed as one of the lead actresses, Karan had a different answer to this. He said only Tiger Shroff is confirmed as of now.