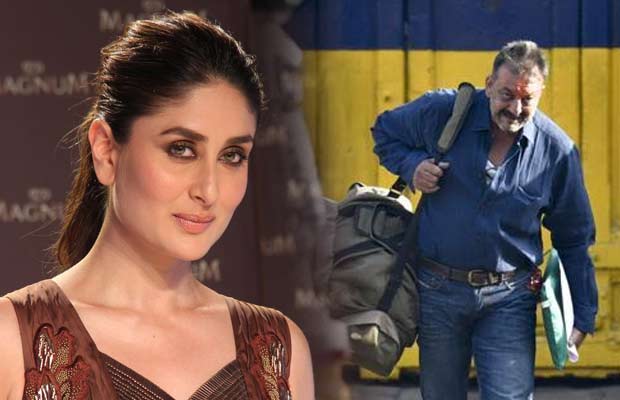 [tps_footer]Yesterday, when Sanjay Dutt was released from the Yerwada Jail in Pune, after having served his five-year sentence for possessing illegal arms in the March 12th, 1993, Mumbai serial bomb blasts case. As expected, the actor’s friends, family and fans left no stone unturned to welcome the ‘Khalnayak’. Not only did a popular eatery offer their signature dish ‘Chicken Sanju Baba’ for free, but his entire locality was decked for his homecoming. People thronged to get a glimpse of the actor as he visited the SiddhiVinayak temple in Mumbai, yesterday.

Kapoor, who was present at the launch of a new flavor for an ice-cream brand said that Sanjay Dutt looks ‘absolutely amazing’. When asked if she was happy for the Khalnayak’s return, she said that the whole industry was happy. She is looking forward to seeing Dutt back on the big screen doing what he does best. She also added that she is a huge fan of the star.

While Kareena and Sanjay only acted in ‘LOC Kargil‘, her sister Karisma has starred in numerous movies with him. When asked if there was any truth in rumors that said she would be a part of the biopic on Sanjay Dutt’s life, she denied all rumors. There were reports that Kareena, will play the role of “Munnabhai” actor’s politician- sister Priya Dutt in the film.

The biopic that is being directed by Rajkumar Hirani will be produced by Vidhu Vinod Chopra. The biopic will reportedly touch upon every aspect of Dutt’s turbulent life – from the age of 17 till present. No actress has been finalized for the movie yet.[/tps_footer]