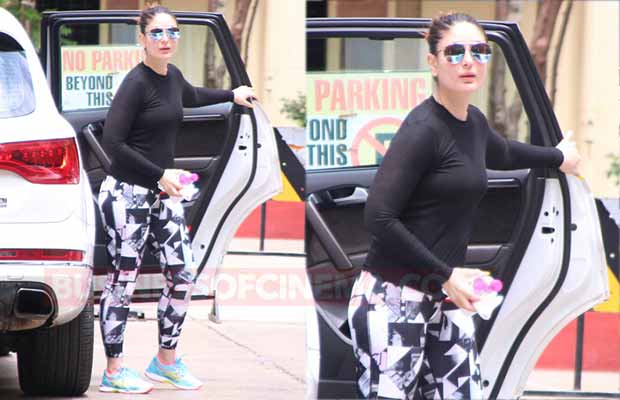 Kareena Kapoor Khan sweats it out at the gym in these cool leggings!

The Bollywood actress Kareena Kapoor Khan is one of the hottest mommies of B-town. The actress was known for her ‘size-zero’ figure, which she lost after her pregnancy. But now the actress is on a mission to regain her perfect figure, as we spot her very often on her way to the gym.

The ‘Ki & Ka’ actress has been spotted again at the gym. But this time there was something different about her look. Kareena was sporting a pair of leggings with a very bold print. The actress was looking pretty cool as she had paired the black and white printed leggings with a solid black full-sleeved T-shirt, sports shoes and reflector sunglasses.

Kareena’s bestie and gym buddy, Amrita Arora has also shared some videos of their workout. Check them out here…

When the mean gurls get on with their mean Saturday workout ????????????‍♀️??‍♀️ #beeboamu #fitnstrong #saturdaymotivation???

On the work front, Kareena Kapoor Khan is all set to make a comeback with Rhea Kapoor’s Veerey Di Wedding that also stars Sonam Kapoor and Swara Bhaskar in the lead. The film, which was supposed to go on the floors last year, will now probably kick-start in September, this year.