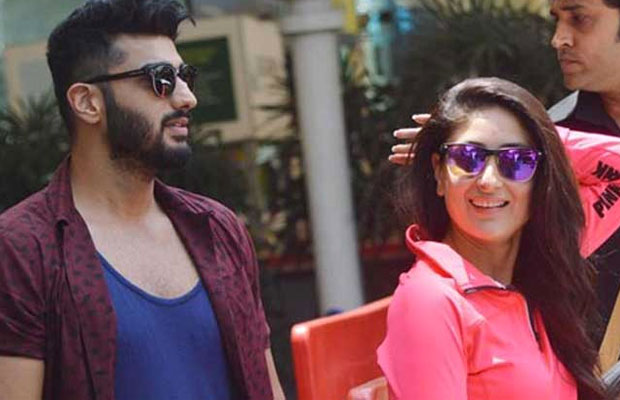 Bollywood’s two amazing stars Arjun Kapoor and Kareena Kapoor Khan are coming together for the first time on the silver screen for their much-talked film ‘Ki and Ka’. Arjun Kapoor who has been desperately waiting to work with his childhood crush Kareena is finally living a dream of working with the actress.

Arjun Kapoor who considers himself lucky by working with Kareena Kapoor Khan will be playing the role of Kareena’s husband in the film. According to the reports, Bebo is following no kissing policy since she is married to Saif Ali Khan. Reportedly, film ‘Ki and Ka’ script had some intimate scenes between Arjun and Kareena, which the latter wasn’t comfortable shooting. When director R. Balki got to know about this, he agreed on the same and made some changes in the script.

Also Read: Bigg Boss 9: Is He The Double Trouble Host With Salman Khan?

As we all know, Kareena Kapoor Khan is a true diva in all sense. She can sport any look and make it work for the audience. The actress who will be playing a role of a sophisticated wife in the film will be donning a very classy look for the film. According to the reports, the actress who will be leading a lavish life as a wife in the film, will be seen dressed up in executive suits, as she plays a hotshot head honcho of a corporate firm and reportedly all the outfits will be designed by Manish Malhotra.

The film is about two people with contrasting ideologies, taking audiences through their interesting journey. While Arjun is a progressive house husband who lovingly supports his wife’s ambitions, Kareena Kapoor Khan, on the other hand, is a super ambitious career woman. Amitabh Bachchan and Jaya Bachchan will make a special appearance in the film.

‘Ki and Ka’ is said to be a rom-com where Arjun and Kareena will be married couple and is directed by ‘Paa’ director R. Balki. The film is slated to release in 2016.