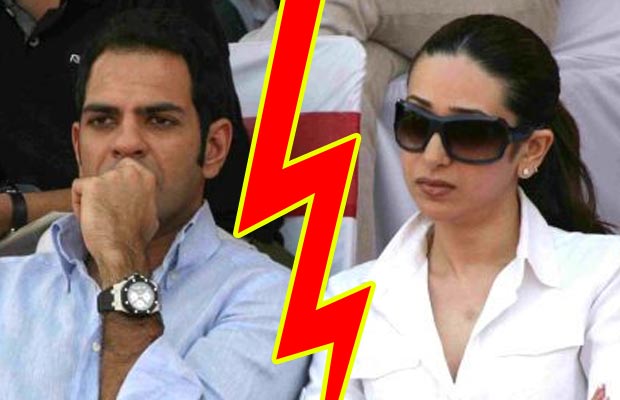 [tps_footer]People get married out of love and children are the outcome of that love and trust on eachother but unfortunately nothing is working out for Lolo. Karisma Kapoor, reigning queen of B-Town, once upon a time had all the biggest actors waiting to sign another movie with her, but it’s getting more and more difficult for Karisma to match steps with her husband Sunjay in real life to save her marriage.

The fallout in their marriage started and gradually all heart breaking news started coming up. Firstly, there were rumours that Sunjay and hotelier Vikram Chatwal‘s ex-wife Priya are a couple. As they were occasionally spotted at various Delhi nightclubs, but later it was said that the duo has become almost inseparable. And this made Karisma Kapoor keep her kids away from Sunjay and since then the legal battle is going on and turning bitter day by day.

Reportedly Sunjay even claimed that Karisma is not a good mother to which Randhir Kapoor, Karisma‘s dad had enough to say “Everyone knows Karisma has always been a good mother. Her husband has been living with another woman. I was against this marriage since day one. The matter is sub judice and hence, I can’t comment further. Eventually, the entire truth will come out.”

At the peak of Karisma career, she married business man Sunjay Kapur and after that just few months of happiness for her and then just heart breaking news one after the other. They have been fight it out to get custody of their kids and things are getting nasty between them.

And now again, recently, we got the news of her plea for divorce that Sunjay stays with another woman in their Delhi house and Sunjay had allegations on Karisma for keeping both the kids away from him and his family. She even claimed that he married her just because she is famous and Sunjay didn’t hesitate to say she married him for monetary reasons.

Now, it’s getting even more ugly. Karisma has revealed something more to her divorce proceedings by saying that after her pregnancy when she couldn’t fit in a dress so Sunjay asked his mother to slap Karisma and Karisma‘s mother in law didn’t correct his son but supported saying that it’s his lifestyle. If it’s true than that’s really cheap to happen to anyone. Why do people forget respecting each other after having a relationship, it’s like thinking you love the person so insult and treat like a doormat. Not done !! She also claimed that Sunjay left their ill son for a polo match.

Once again, Sunjay has claimed that Karisma married him only for money. He missed out on reading this said by Randhir Kapoor “Everyone knows our credentials. We are Kapoors. We don’t need to run after anyone’s money. We have been blessed with not only money, but our talent can support us for the rest of our lives.”

This is really getting nasty day by day and wish relation didn’t had to get so bitter and people didn’t had to fall so low go save their ego instead of relation. There seems no scope for a amicable divorce now between Sunjay and Karisma but Will he really take care of kids if this is true then ? What do you feel about the whole issue ?? We know it’s a personal matter but it’s in public now. What would you be like in such a heart breaking situation ?[/tps_footer]