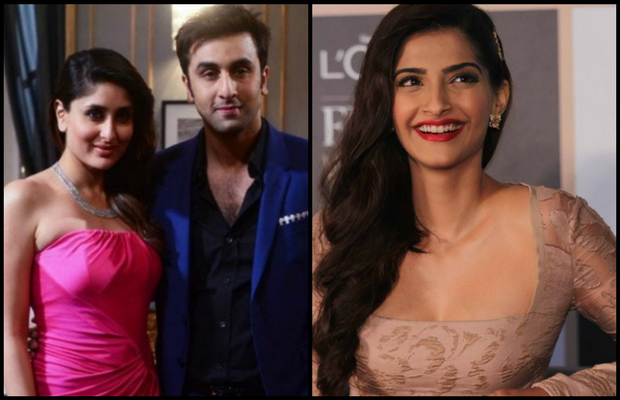 While Koffee With Karan is the talk of the town since it’s first episode, the next pair that will add on to the fun ride will be Kareena Kapoor Khan and Sonam Kapoor together. Well! even the trailers have already brought in excitement among the fans.

Karan Johar asked Sonam Kapoor if she would ever date her Saawariya co-star Ranbir Kapoor. So before she could answer Kareena intervened and said that her elder sister Karisma Kapoor is very keen to see Sonam as her sister in law.

When Sonam responded to this, she said “Ranbir and I’d make better friends”. Well! That’s not enough, she also said that she doesn’t think she can keep Ranbir happy.

Sonam and Ranbir are coming together in Sanjay Dutt’s biopic directed by Rajkumar Hirani.

Also, the two were rumored to be dating each other while they worked together in Sanjay Leela Bhansali‘s Saawariya.

Sonam Kapoor, still loved for her performance in Neerja has been nominated for the Best actress category in the awards.

Kareena Kapoor and Sonam Kapoor, that were never seen together came together on the Koffee with Karan. Like every other episodes, we are getting to see new couples and pairs coming off screen.

Let’s wait till we get to see to see the beauties on the show tomorrow.