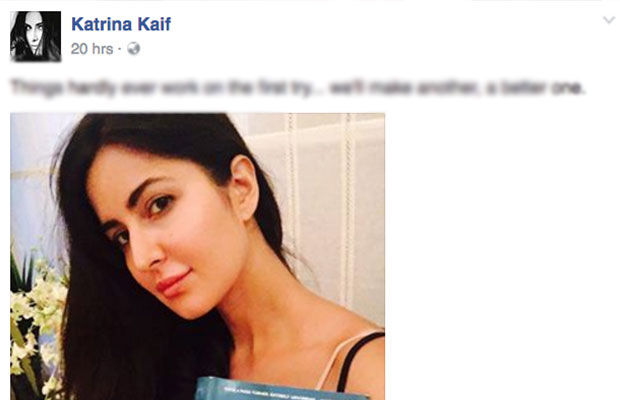 Katrina Kaif has got a right platform to interact with her fans. The beautiful actress is very often active on the social media site Facebook and she regularly has some posts on her Facebook timeline to keep her fans updated. Whether be it her gorgeous photos from any photo shoot or any behind the scene pictures or videos, the Baar Baar Dekho actress does not miss a chance to keep her fans glued to her Facebook posts.

Recently, Katrina Kaif posted a photo of herself on Facebook where she is seen with a book titled All The Light We Cannot See by Anthony Doerr. Katrina looks simple yet stunning in the picture. She gave a caption to her picture which reads, “Things hardly ever work on the first try… we’ll make another, a better one.” 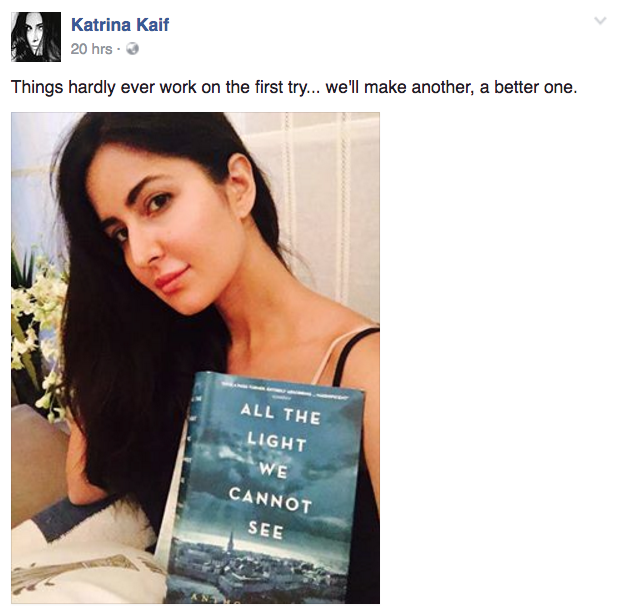 Well, we don’t know what Katrina is trying to convey with her captioned photo on Facebook. The actress had earlier also revealed that she writes her own captions for the photos. We wonder what she is exactly trying to talk about.  May be hinting something at her ex-beau Ranbir Kapoor? That remains a mystery yet. However, the actress never fails to impress everyone with her adorable photos.

On the professional front, Katrina Kaif is currently filming Jagga Jasoos along with Ranbir Kapoor. The film is slated to release on April 7, 2017.The actress will then be seen in Tiger Zinda hai opposite Salman Khan which is a sequel to the 2012 blockbuster film Ek Tha Tiger. The sequel is set to release on Christmas 2017.