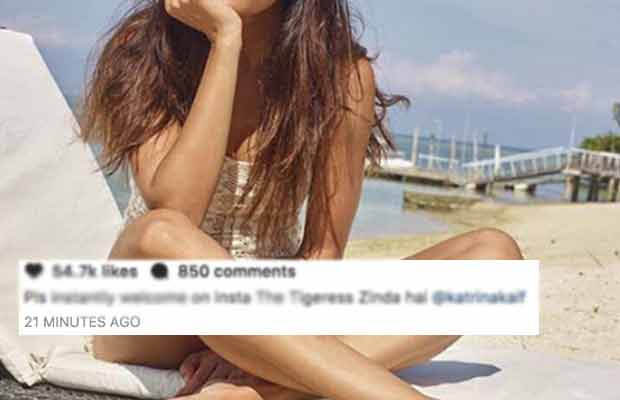 Bollywood’s gorgeous actress Katrina Kaif made her Facebook debut last year in July.  The actress, who was never active on any social media platform, chose to surprise her fans by joining Facebook, which happens her very first personal social media account. Katrina’s fans were very much thrilled, and soon she received millions of likes on her account.

Well, now after Facebook, Katrina Kaif has finally joined the picture-sharing app Instagram. Katrina Kaif’s widespread and undisputed popularity has forced her to join Instagram. The actress posted her first Instagram post today after doing a candid event with the Instagram’s international team.

Katrina Kaif took to Instagram and shared the first gorgeous picture of her with a caption, “new beginnings … coming from my happy place #helloinstagram”

Salman Khan immediately welcomed Katrina on Instagram with a beautiful picture. He captioned his and Katrina’s picture as, “Pls instantly welcome on insta The Tigeress Zinda hai @katrinakaif”

Well, the Baar Baar Dekho actress is soon planning to join Twitter also. However, the actress says that she would never be a part of Snapchat.

Meanwhile, Katrina Kaif has recently wrapped up the shooting of her much-delayed film, Jagga Jasoos opposite former boyfriend, Ranbir Kapoor. Jagga Jasoos is releasing this year in July.

The gorgeous actress has also wrapped up the first two schedules of Tiger Zinda Hai in Austria and then in Mumbai with co-star Salman Khan. The film is the sequel of Kabir Khan’s Ek Tha Tiger, which is now being directed by Sultan director Ali Abbas Zafar. The film is releasing this year in December.