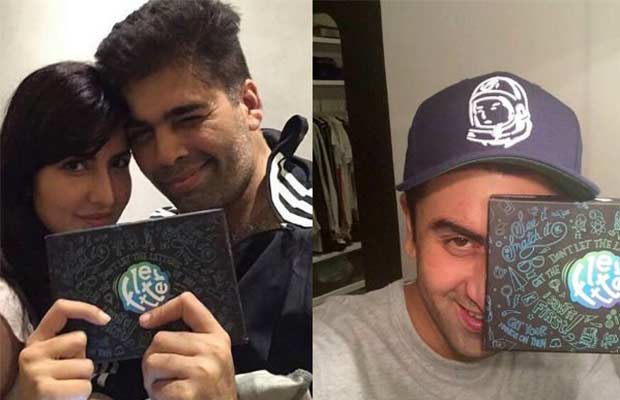 [tps_footer]Bollywood’s gorgeous ex-couple Katrina Kaif and Ranbir Kapoor have been trying their best to keep things calm between them and a lot of timed they have avoided media interactions together. And, as far as Jagga Jasoos Ranbir Kapoor is concerned, he has been miffed with the media a lot of times and it was unpleasant to see our Rockstar in a grumpy mood at most of the events. But, now director, producer and ‘wanna be’ actor Karan Johar (after watching his acting skills in Bombay Velvet) was spotted hanging out with Katrina Kaif and also with Ranbir Kapoor but separately.

Both, Katrina Kaif and Ranbir Kapoor are giving their best to complete Jagga Jasoos and leave no stone unturned but their break up is so fresh that it creates a lot of delays and rescheduling but they are trying to finish the last schedule of Jagga Jasoos. Karan Johar is a close friend of both, Katrina and Ranbir, he had been hanging out with Ranbir-Kat on the sets of Jagga Jasoos and at the same time he brought a game for them. Fletter is a word game and you need to shout out the word made with a particular letter. It was an unexpected gift from Karan Johar but we also know that he likes to add spice in other people’s life and we wonder what he was thinking by gifting this game to Ranbir and Katrina who are not even friendly on sets other than being professional.

We hope Jagga Jasoos gets completed soon and we get to see Kat-Ranbir together, at least onscreen![/tps_footer]