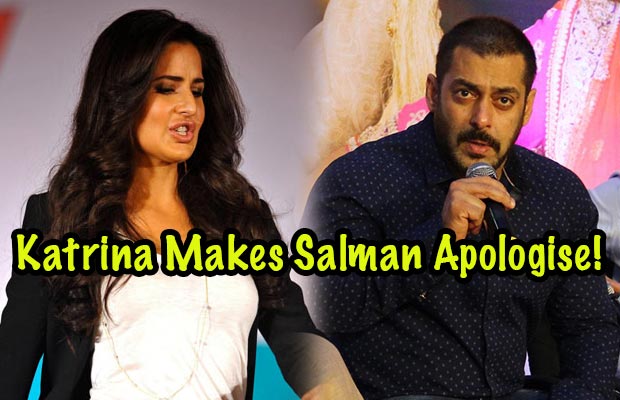 [tps_footer]Bollywood actress Katrina Kaif and Salman Khan share a close bond even years after they split from each other. The secret love birds who never openly accepted their relationship, have always maintained their equation as friends and have a certain liberty when it comes to each other. That is why when Salman apparently made fun of Katrina on a TV show, she called him up to yell and he apologized like a good friend in turn. Cute isn’t it?

In her interview with GQ magazine, Katrina Kaif has opened up like never before. The actress has shown us the deep and soft side of her which is quite emotional and connectable, unlike her usual silent nature. Katrina Kaif opened up about the time when Salman Khan appeared on Comedy Nights With Kapil to promote his film Prem Ratan Dhan Payo and ended up making fun of Katrina Kaif. Surely, the actress was offended by what he said and thus called him up to yell at him.

Katrina Kaif stated, “The base of my relationship with Salman was correct, it was true. Which is why we are still able to be friends. But he lives in a parallel universe, always making these jokes about me publicly, which get the media really kicked. Like the comment he made on Kapil’s show when he saw my pictures on a set of crackers. ‘She is of no use to me’! I called him and yelled at him. I can do that, it is the sort of equation we have. He said, ‘Okay sorry I will apologize to the media’. I told him to do no such thing and maintain a dignified silence if that is possible.”

Well, we’re certainly delighted to see Katrina open up like this, and to know what a cute bond she and Salman Khan share till date![/tps_footer]