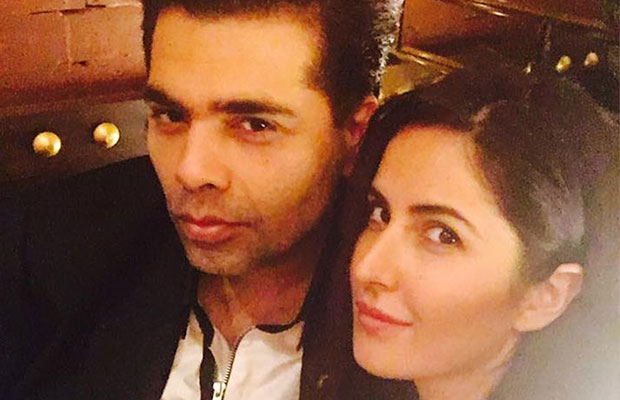 Katrina Kaif is one of the kind and humble actresses in the film industry today. The actress has very few good friends in the industry with which she shares a great bond. It seems that Katrina is sharing really a great bond with Karan Johar these days. Karan Johar is one such person who is admired by many people in the industry today. Kat has become one of them. Katrina recently announced Karan Johar as her most favourite person in the world.  The Fitoor actress recently uploaded an adorable picture on her facebook timeline with KJo and captioned it as ‘My favourite in the whole world.’ Doesn’t that sound really cute?

Katrina Kaif was spotted last night at a dinner hosted by her favourite person Karan Johar in the suburbs. Kat was dressed in a white dress and looked very sweet in the picture uploaded by her. The gathering was very private. The Baar Baar Dekho actor Sidharth Malhotra was also present at the dinner. Among the others spotted was Ileana D’Cruz, Filmmakers Abhishek Kapoor and Dinesh Vijan and fashion designers Kunal Rawal and Rocky S.

Katrina Kaif and Karan Johar were captured last night outside the venue where Karan accompanied Kat to her car. Katrina was also a part of the Dream Team Tour which included young Bollywood celebrities like Varun Dhawan, Sidharth Malhotra, Parineeti Chopra, Aditya Roy Kapoor, and Alia Bhatt. Karan Johar was the host of the shows and it seems that KJo and Katrina’s bond got stronger since then.