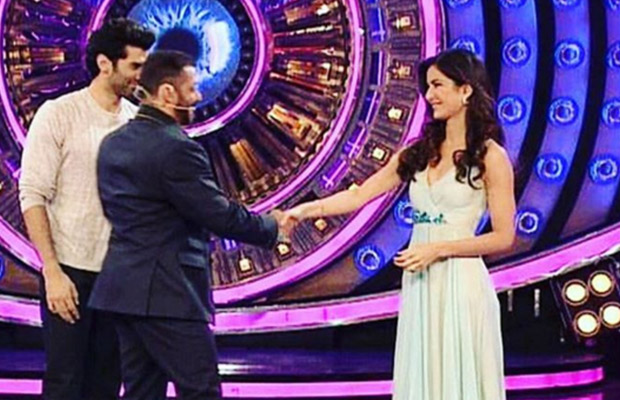 [tps_footer]As we all know Bollywood’s ex-couple Salman Khan and Katrina Kaif reunited after years on Bigg Boss 9 show. The two mesmerized the crowd with their amazing bonding once again on the most popular reality show.

They might have moved on in their personal life, but professionally they came together once again and interestingly just when Ranbir and Katrina have reportedly parted their ways.

Moreover anything, Salman Khan was seen all happy and in praises for Katrina Kaif! On the stage of Bigg Boss 9 grand finale, Salman Khan was in all praise for ex-love Katrina. Salman said, “The whole country is in awe of you, including me! So, obviously you are talented,” this left Katrina Kaif blushing.  Not only that, Salman also enacted a romantic scene from Fitoor with Katrina Kaif that left audiences shout out loud.

To which she replied saying, “It was Very wonderful. It is something I enjoyed. I might want to explore that some more.”

Well, Katrina Kaif has shared her experience of being with Salman on Bigg Boss 9, we wonder what Salman has to say on the same!

Nevertheless, Salman Khan and Katrina Kaif’s appearance on Bigg Boss 9 received thunderous response from the audiences and left everyone in awe including ‘Being Human‘ star.[/tps_footer]