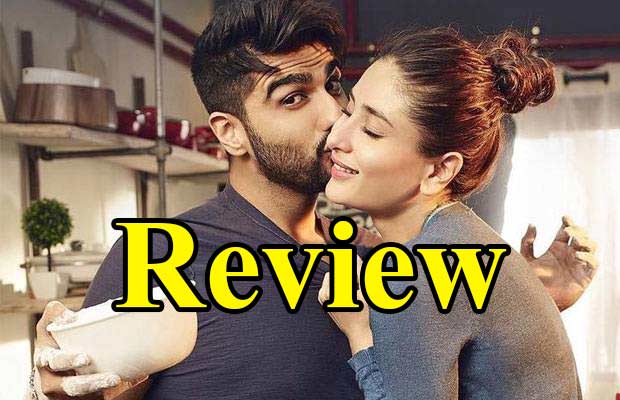 [tps_footer]It’s almost as if the script of this film began with two words on a page: house husband, and then the writer-director, R Balki, decided to weave a two hour long feature film around this contemporary idea. Gender role reversal, breaking stereotypes, thinking out of the box etc are great marketing buzzwords, which sound good in boardrooms and in market research PowerPoints, but in a Bollywood movie you need more than sermons.

Kia and Kabir meet on a flight. He is whimpering into his window seat and she is so absorbed by her tapping on a laptop that she has not even noticed the young man seated two seats away from her. He says he is missing his mother. They make a connection, drink copious amounts of whiskey and she – a career woman on a fast track at a consumer products company — is intrigued. Kabir is heir to a business empire but he’d rather be a self-made househusband. His housewife mother was his role model, not his ambitious and heartless father.

They are both born on the same date, and decide to marry on that date too. This is itself so cheesy and annoying you want to take the three cakes they cut every year on April 15 and smash them. But the indefatigable superman Kabir can cook, clean, manage the domestic help, attend kitties, earn pocket money and be a shiny happy person at the end of the day. He understands healthy living and assimilates with the kitty party building ladies. He is all things to all women. However he does not have even one healthy relationship with a male (at least none that we are shown). When Kia’s career hits a high note, Kabir too gets thrust into the limelight and embraces his newfound celebrity as a spokesman for busting gender stereotypes with zeal. Kia is jealous of the spotlight shifting from her to him. As cracks begin to appear in their ideal relationship, we see the usual issues afflicting them – the person who earns the bucks, holds the power and the person who does not keep their end of the bargain is admonished.

As I said before, this is a film based on a concept rather than a story, and while certain moments ring true, the whole does not hold. For one, Kareena Kapoor Khan is acting for both Ki and Ka, because Arjun Kapoor is dead energy. His character’s obsession with trains is also irritating especially as it inspires garish interior decoration of their apartment that is part tribute to ‘Hugo’ and part a waste of production budget. But it’s a joy to see Kareena Kapoor Khan in a meaty and textured role after a while. It also helps that she is styled and costumed perfectly. Another cute but gratuitous addition is a cameo by Jaya and Amitabh Bachchan playing themselves.

Many of the messages are delivered through dialogue and speeches, mostly delivered by a holier-than-thou Kabir and received by a constantly apologetic Kia for not being more grateful, appreciative and open-minded. It is true that society has an unhealthy interest in knowing what someone does (it’s usually the second question we ask a stranger after their name), and Kia realistically shows us her discomfort with sharing Kabir’s ‘profession’ with her colleagues. She finally shows him she’s proud by making a lame speech at a house party.

Too bad the concept didn’t translate into a more coherent story and more engaging cinema.