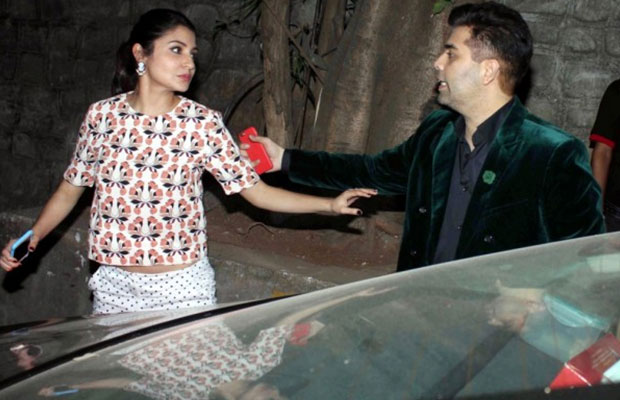 Anushka Sharma is one of the most successful actresses in the industry today. Going by her career graph, the actress has worked with all the A-listers in Bollywood. With PK and Sultan, she has been the only actress to have two films in the 300 crore club. The NH10 actress is also very fortunate enough to have worked with all the three Khans who are ruling Bollywood for quite a long time now. Anushka Sharma is all set to mesmerize her fans on the silver screen with Karan Johar’s Ae Dil Hai Mushkil.

Anushka Sharma made her entry in Bollywood in 2008 with Rab Ne Bana Di Jodi opposite Shah Rukh Khan. Luckily the actress again worked with King Khan in Jab Tak hai Jaan (2012) and the actress will again be seen for the third time with SRK in Imtiaz Ali’s next titled as The Ring.

However, it is not known to many that when the beautiful actress made her debut with Rab Ne Bana Di Jodi, the ace filmmaker Karan Johar was not pleased with her.

This was revealed recently by Karan Johar himself during an interview with the journalist Rajeev Masand. Karan Johar, Ranbir Kapoor and Anushka Sharma were present to promote their film Ae Dil Hai Mushkil. In the interview, the ADHM director shockingly revealed that he was not pleased by Anushka Sharma when Aditya Chopra showed her pictures to him. However, she was taken on board for the movie to which Karan felt that her career would not last for a long time in Bollywood.

KJo also revealed that he was very much impressed with Anushka’s performance in Band Baaja Baaraat. Well, we need to say Anushka Sharma’s talent was keenly observed by Karan Johar and now she is a part of his directorial venture Ae Dil Hai Mushkil which is all set to release on October 28, 2016.

Watch Rajeev Masand’s interview with the cast of ADHM: