Kriti Sanon, last seen in Rohit Shetty’s Dilwale opposite Varun Dhawan, Shah Rukh Khan and Kajol is busy shooting for her next film Raabta starring the MS Dhoni actor, Sushant Singh Rajput in the male lead. While the shooting has been running smoothly, seems there have been some barriers to Kriti . But how?

Well! The actress ended up injuring her leg while shooting for an action sequence for the love story. Kriti Sanon, took to Twitter sharing her story from the Raabta sets.

She wrote, “Bruised n how! Looks like an artwork of bruises! #NoPainNoGain #Raabta“.
This is not the first time that the actress has injured herself, she was earlier injured in the month of May in Budapest. 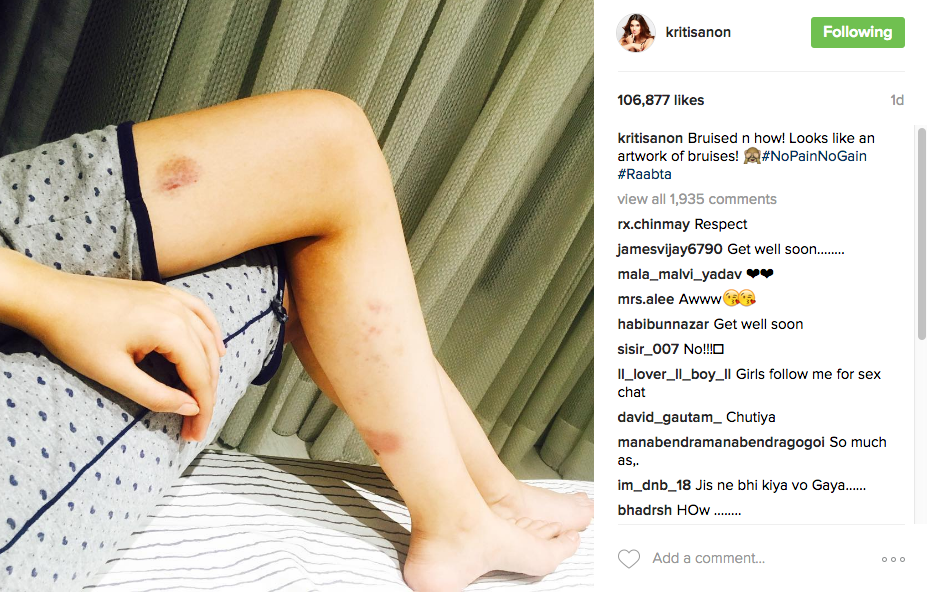 Raabta is being directed by Dinesh Vijan who is also a successful producer who is donning the director’s hat for the first time. The film will hit the screens this June even though it was said that it will release in February.

The film shows a fresh pair on screen with Sushant Singh Rajput and Kriti Sanon romancing each other. Also, this film has brought in many linkups between the alleged couple.

Well! Let’s see how the duo looks on screen this June. Let’s hope Kriti Sanon recovers as early as possible and stays fit.