Adapted from the Shakespearen classic and starring the dapper Kunal Kapooor in a never seen before avatar of a warrior, Veeram’s official theme song ‘We will rise’ was launched today by the hands of none other than the legendary Amitabh Bachchan. The actor took to Twitter and Facebook to launch the song.

Sung by Kari Kimmel, the song has been composed by Jeff Rona who has also composed the music for movies like Phantom, God of Water, and Traffic III amongst others. Adding to the accolades, the song was also nominated for the Original Song category at the 89th Academy Awards. Sony Music International has already acquired this soundtrack for their International album.

Going by the response, ‘We will rise’ is already on the ‘rise’ to be the next chart-topping number of our country! 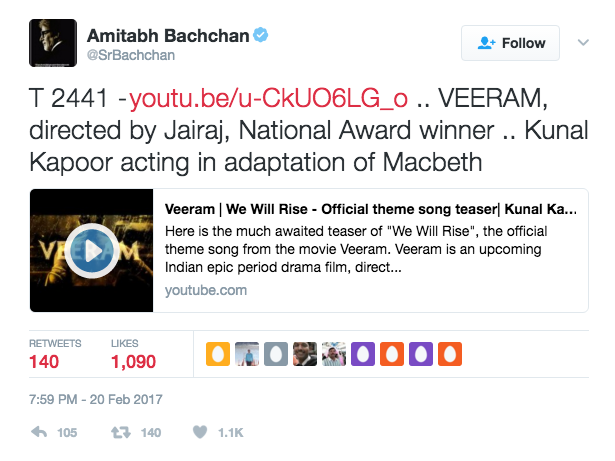 Directed by national award winning film-maker Jayaraj Nair, the film has been produced by Chandramohan Pillai and Pradeep Rajan of Chandrakala Arts.