The famous Bollywood star Priyanka Chopra who has left no stone unturned to rock it at Hollywood has bagged two more projects in Hollywood.

Priyanka Chopra has earlier worked with Dwayne Johnson ‘The Rock’ and Zac Efron in Baywatch.

Baywatch may have tanked in the US box office, but the 34-year-old actress shows no signs of slowing down. She started shooting for A Kid Like Jake with Octavia Spencer, Claire Danes and Jim Parsons and is currently working on Hollywood comedy ‘Isn’t It Romantic’ .

Recently, some pictures from the sets of ‘Isn’t It Romantic’ got leaked on the internet. The pictures tell us a completely different story until we see the video. What looks like a rather steamy scene is actually Adam Devine helping Priyanka out as she chokes on her lunch. We are wondering if it just about the angle or that is how they want us to see it.

In other pictures, Priyanka looks gorgeous as ever, dressed in a pink cold shoulder dress with a deep neckline. She sure has got looks that could kill.

In some pictures, PeeCee is seen having a fun time with the funny Hollywood star, Rebel. We can’t wait to see the two of them share the same screen space! Rebel will be seen showing off her extraordinary a cappella skills in Pitch Perfect 3 which is going to hit the theatres soon!

Priyanka Chopra has worked in a few Hollywood TV series too like ‘Quantico’. The talented actor also shocked her fans with her amazing singing skills with ‘Exotic’.

Priyanka has been rumoured to join the Kalpana Chawla biopic and a Sanjay Leela Bhansali project based on poet-lyricist Sahir Ludhyanvi’s life. 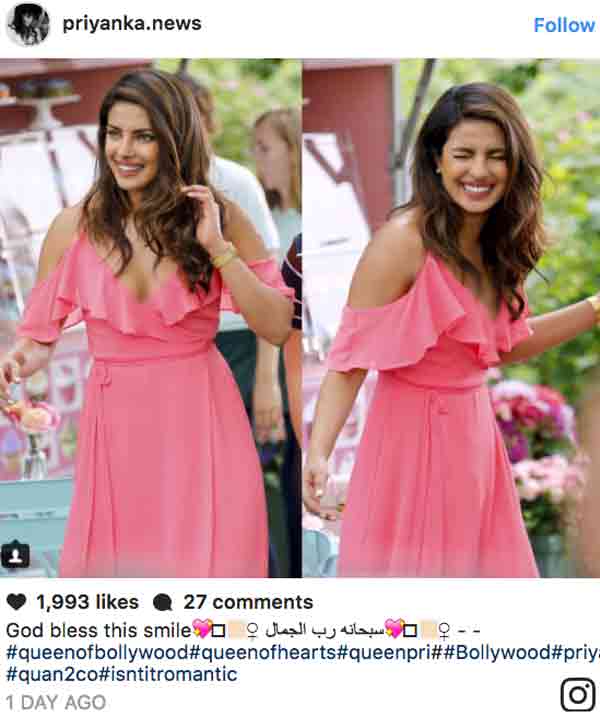