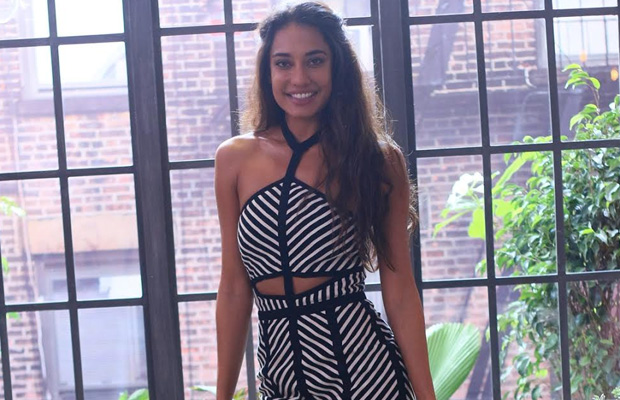 On the sets of COLORS Infinity’s Vogue BFFs, when the host Kamal Sidhu asked Lisa Haydon about her body issues when she was a child, she said, “People always think that if you’re on the larger side or you’re overweight, then you become complex.

But I think, being a really skinny kid makes you quite complex too. I just remember being picked on for being a toothpick. Really skinny and really tall. Eventually, you fill out and then, you tend to not put on weight, when you’re older. But, when you’re younger and if you’re really thin, people just make fun of you.”

Watch Lisa Haydon and Tarun Tahiliani reveal all this and more on Saturday, 19th November, 9 PM onwards on COLORS Infinity.

Recently, Lisa Haydon announced her marriage to UK-based entrepreneur Dino Lalvani by posting a super cute photo of her beach wedding on Instagram on October 30, 2016 and captioned it “Just married”.

There were reports doing rounds which stated that her father-in-law, Gulu Lalvani, was originally a Pakistani.

In a series of tweets, where the Housefull 3 actress was clearly vexed, she clarified everything that was reported in a publication.

The 30-year-old actress, posted tweets that read: “My husband is Indian. My father-in-law, Gulu Lalvani, was born in pre-partition India and was thrown out of what is today called Pakistan. To call someone, who has gone through the struggles of partition, non-Indian is absurd.”

“Sad this article are the good wishes you would give a girl on the day she begins a new&exciting chapter in her life.”

“The world needs lovers not haters”

Lisa was last seen on the big screen in Karan Johar’s Ae Dil Hai Mushkil where she had a cameo appearance. She’ll be next seen in a web series called The Trip and also Baadshaho where she will be seen with Ajay Devgn and Emraan Hashmi.