Lisa Haydon announced her marriage to UK-based entrepreneur Dino Lalvani by posting a super cute photo of her beach wedding on Instagram on October 30, 2016 and captioned it “Just married”.

There were reports doing rounds which stated that her father-in-law, Gulu Lalvani, was originally a Pakistani.

In a series of tweets, where the Housefull 3 actress was clearly vexed, she clarified everything that was reported in a publication.

The 30-year-old actress, posted tweets that read: “My husband is Indian. My father-in-law, Gulu Lalvani, was born in pre-partition India and was thrown out of what is today called Pakistan. To call someone, who has gone through the struggles of partition, non-Indian is absurd.”

“Sad this article are the good wishes you would give a girl on the day she begins a new&exciting chapter in her life.”

“The world needs lovers not haters” 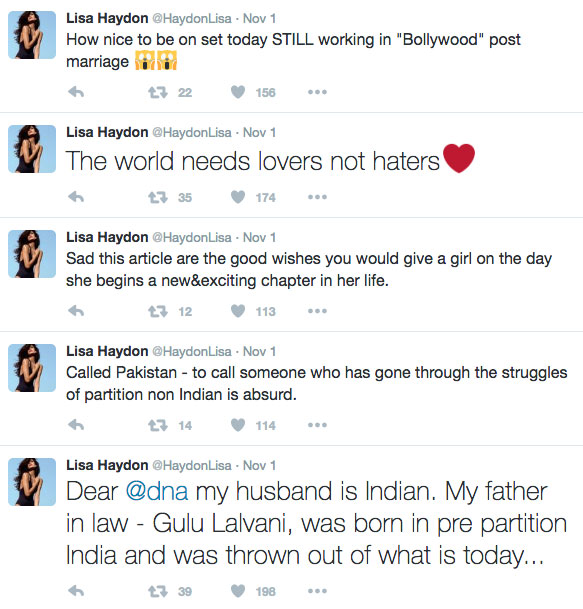 Gulu Lalvani, who has co-founded British telecommunications company Binatone with his brother in 1958, was born in Karachi and left during Partition and became an Indian citizen. Currently he and his family are British subjects. His son Dino now runs the company.

The Queen star had absolutely no plans of quitting acting or Bollywood post her marriage and seems like she is back to work. She tweeted: “How nice to be on set today STILL working in “Bollywood” post marriage”

Lisa was last seen on the big screen in Karan Johar’s Ae Dil Hai Mushkil where she had a cameo appearance. She’ll be next seen in a web series called The Trip and also Baadshaho where she will be seen with Ajay Devgn and Emraan Hashmi.