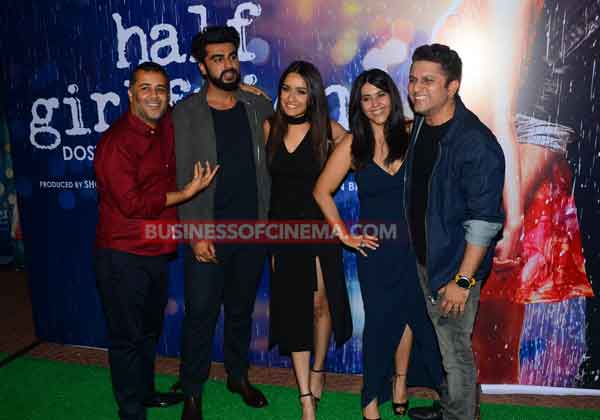 Ekta Kapoor, who celebrated the success of her latest production “Half Girlfriend”, says at one point she had lost confidence in herself after her films flopped one after another. And because of that, she was initially not sure about producing “Half Girlfriend”.

“With my production house, I lost confidence on myself when I gave five flop films in a row. My last hit film was with Mohit Suri in 2014 (Ek Villain). There was a time when I wasn’t even sure whether I want to continue making films or not, but God has been kind, prayers have worked and film has done well,” Ekta Kapoor said at the success party here on Friday night.

“I would like to thank each of my team members for their hard work for this film,” Ekta added, appreciating the efforts of director Mohit Suri and lead actors Arjun Kapoor and Shraddha Kapoor.

Talking about negative reviews from critics for “Half Girlfriend”, Ekta said: “When my TV soap ‘Naagin’ was launched, during that time, there were 500 stories that how this soap is the reason to malign creativity and entertainment factor on television.”

“With this film also, critics felt that ‘Half Girlfriend’ is a melodrama but I am glad that masses accepted the film. More than money, I think acceptance from the audience is the biggest thing which I haven’t experienced in the last three years.”

Ekta also spoke about the success of “Baahubali 2: The Conclusion” which has set a new box office benchmark in the Indian film industry.

“‘Baahubali’ is not a film, it’s a sensation. This film doesn’t belong to film categories. ‘Baahubali’ is best thing to happen and we can refer to it as a film which has gone beyond expectations,” she added.

Chetan Bhagat, the author of Half Girlfriend, was also present at the party along with his wife.

Commenting on its performance and reception, Chetan Bhagat said: “Ultimately, audience is the king of box office and not the critics. Compared to past few films, it is the best performance of Arjun and Shraddha.”

The box office success of “Half Girlfriend” has been a cause of great relief for even Arjun and Shraddha.It has come as a much-needed hit after the failure of Arjun’s last two films Ki & Ka and Tevar. Even Shraddha’s last two films — Rock On 2 and Ok Jaanu did not work at the box office.