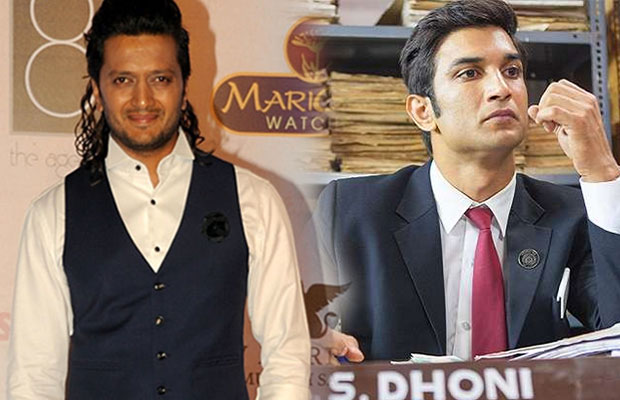 [tps_footer]Riteish Deshmukh has launched the Marathi version of the trailer of ‘MS Dhoni: The Untold Story’ yesterday.

With M.S Dhoni : The Untold Story getting a Marathi release, this will be for the first time a Hindi biopic will get dubbed in Marathi.

Sushant Singh Rajput, who plays the Indian cricket captain in the much- awaited biography, will be seen talking in aamchi bhaasha for the entire duration of the movie. For, the film is set to get dubbed in Marathi.

The makers of the film recently launched the trailer in two other languages. While actor- producer Dhanush took to Twitter to launch the Tamil version, ace Telugu actor Naveen Babu, better known as Nani, unveiled the trailer in Telugu.

The Tamil and Telugu trailer as well are receiving an overwhelming response.

And now Maharashtracha Mulgha Riteish Deshmukh has launched the Marathi trailer of the most awaited film of the year. 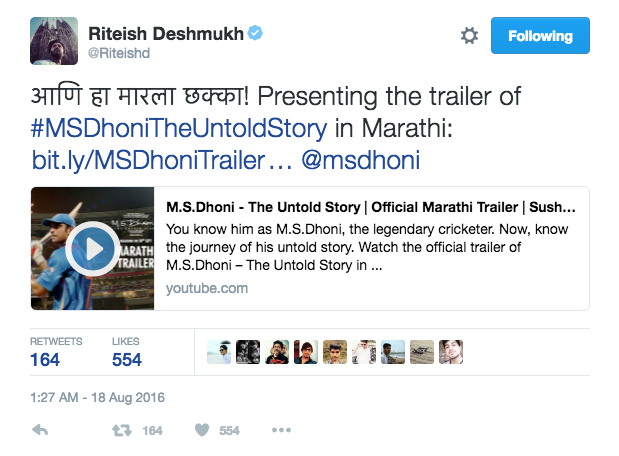 The amount of support ‘MS Dhoni: The Untold Story’ is getting from everywhere is stupendous. This shows the supremacy of Captain Cool Dhoni.

The trailer of the movie was launched on a mega scale, as it was launched in 3 cities. The trailer which was out had shattered all the records, and had set benchmarks for other films.

With the tremendous response that the trailer has been receiving, it has surely hit a six!

Helmed by ace director Neeraj Pandey, produced by Arun Pandey and Fox Star studios, the film which is one of the most anticipated films of the year is all set to release on September 30th, 2016.

Please find the link below;