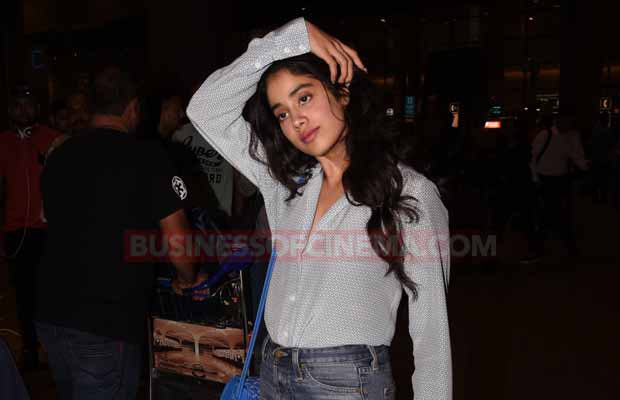 Post her mother Sridevi’s sudden demise, Janhvi Kapoor is back to her commitments. She resumed shooting for her debut film, ‘Dhadak’, two days after ringing in her 21st birthday.

Recently, few pictures of Jahnvi Kapoor and her co-star Ishaan Khatter made their way on social media. The pictures see them shooting for their much-awaited film ‘Dhadak’.

Janhvi Kapoor looks beautiful in a yellow suit while Ishaan sports a yellow shirt, mustard pants and a blue koti. Well, not just pictures even a video of them from the sets has gone viral on social media.

This has left the makers of the film quite angry. Reportedly, the makers are trying to keep Ishaan and Janhvi’s looks under wraps but despite repeated attempts, somehow the glimpses of them make their way to the Internet.

The makers even tried to pull down the video but failed to do so as it has already gone viral. In order to take strict action, director Shashank Khaitan has decided to ban mobile phones in order to avoid anything getting leaked.

This might be a little difficult as they have been shooting outdoor and it is not possible to stop and keep a watch at everyone. The video has been leaked has been shot out by fans who had queued up outside the sets to catch a glimpse of the stars. However, the team is doing everything for the tight security.

Here’s the leaked video that is doing rounds on the social media:

@janhvikapoor On the set of #Dhadak