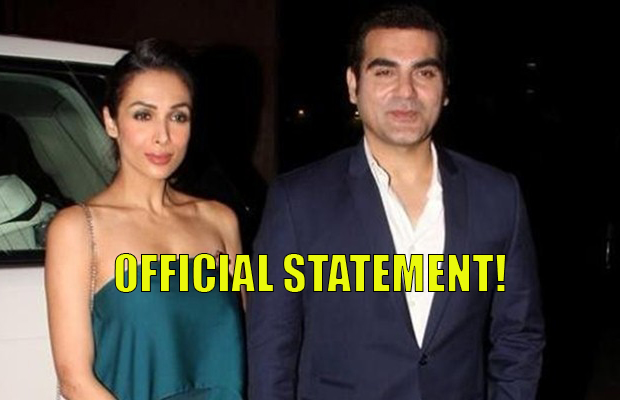 Malaika Arora and Arbaaz Khan were the most adored duo of the tinsel town. The two celebs were known for their lovable stints towards each other. The two stars have nonetheless ended their romantic saga and have headed towards separation. The year 2016 has seen loads of splits. Malaika and Arbaaz have also joined the list now.

Shocking everyone to the core with their sudden decision to part ways, many speculations regarding the reason behind the same have been making rounds. Reports earlier suggested that glamorous diva Malaika Arora was unhappy with the financial condition of Arbaaz. The reports further added that Arbaaz’s parents wanted Malaika to concentrate on her family and keep her career aside for a while, which was unacceptable to the actress.

After all the rumored reasons, the two celebs have now issued a joint statement to put an end to gossip mongers. The statement says, “We have maintained a dignified silence till now, but it is causing us too much confusion and is disturbing for our families. To put all of the speculation to rest, we are giving out this statement. People claiming to be our friends and sources have been speaking on our behalf giving out wrong, malicious information. They have maligned us for long and we have kept quiet and not said a word as it’s a personal matter between us. We have got a child and our families are involved, but just because we have not said anything till now, it doesn’t give anybody the license to speculate on any rubbish about us.”

The statement by Arbaaz Khan and Malaika Arora adds,“The truth is, we have taken a break, but that doesn’t mean people can presume, assume and speculate things of such malicious nature. We are taking out time to figure out our lives… Yes, it’s true that we are separated, but where our lives go and what transpires between us, it is for us to decide. Wherever it goes from here, we will talk about it when we are ready to.”