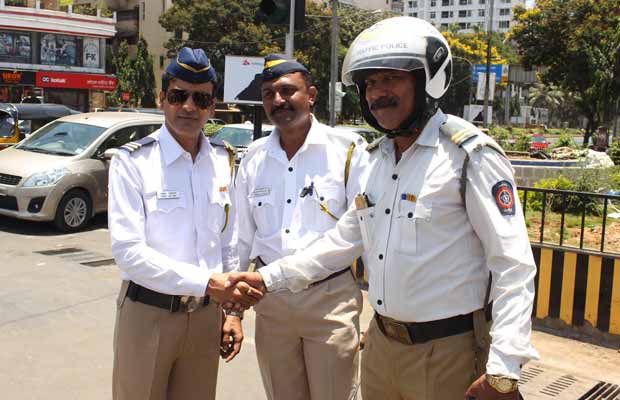 [tps_footer]With the barometer scaling on an upward incline with every passing day, the real ones who bear the brunt are the traffic constables manning key junctions in the city.

These unsung heroes stand strong under the scorching sun, while the crowd crosses them in air conditioned cars.

In Manoj Bajpayee‘s upcoming next,Traffic, Manoj Bajpayee plays a traffic constable who spearheads a situation where a heart has to be delivered to a patient in another location, amidst the heavy traffic.

Prior to the release, the actor turned a Traffic cop for a day.

He stood at a busy traffic signal in Juhu, Mumbai and manned the traffic at the key junction.

The motorist were surprised to see Manoj Bajpayee in a Traffic constable avatar.

Manoj had a good time with his fellow constable mates managing the traffic. In fact, Manoj while preping for the character understood the mannerism and working style, so much in dept that he managed to put up an impressive show on ground.

The actor worked hard to get into the skin of the character, he paid special attention to understand how Traffic Personnel communicate and was very observant of their body language as well.

His strong performance in his latest release, Aligarh, has given the actor critical acclaim and has helped him garner accolades and has created an audience awaiting the release of Traffic.

Traffic is an emotional thriller based on a road trip from Mumbai to Pune which is based on a true story. The film revolves around transportation of a heart for a heart transplant case, chasing a strict deadline. During the mission they face numerous difficulties and traffic being one of them.

The film tugs at our hearts as a police car races to deliver a live heart (organ) from Mumbai to Pune just in time to save the life of a 13 year old girl.

The films boasts a powerful star cast of actors like Manoj Bajpayee, Jimmy Shergill, Divya Dutta and Sachin Khedekar, who are known for their award winning performances.

The film is directed by Late.Mr. Rajesh Pillai, produced by Deepak Dhar of Endemol India and presented by Foxstar studios.[/tps_footer]