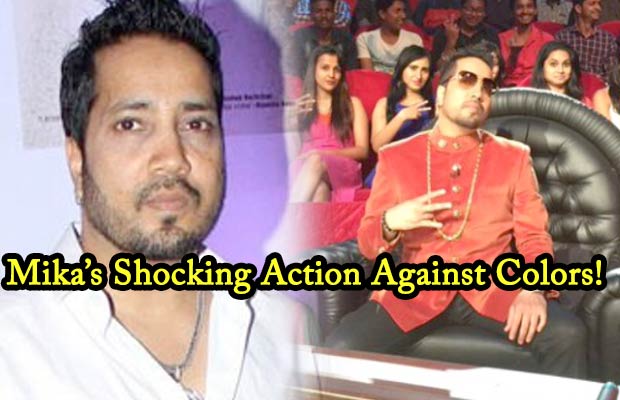 [tps_footer]Bollywood’s popular singer Mika Singh is usually surrounded by controversies and by smashing hit songs too. But, this time he is making news for slapping a legal notice to Colors channel. Mika Singh is the special guest on the show Comedy Nights Live but his friendly appearance for the rival channel show The Kapil Sharma Show has made Colors and CNL teams very unhappy. Mika was sharing the stage with Kapil Sharma and his team to promote his songs in Housefull 3 but Comedy Nights Live didn’t feel good to see Mika enjoying and being a part of Kapil Sharma‘s show as we all know that Kapil and his Comedy Night’s With Kapil team was slapped with notices from Colors channel and finally Kapil moved on to join hands with the rivals Sony Tv channel to star with a new show called as The Kapil Sharma Show which we all love to watch.

But now we won’t get to see Mika Singh as the special guest on Comedy Nights Live in fact there are reports that suggest Sohail Khan will replace Mika as the Special Guest on CNL. And, now it’s said that Mika has demanded the channel to clear all the dues or else he is ready to take further legal action against them. A source close to the show reveals that, Mika Singh, who was ousted from Comedy Nights Live for setting foot on a rival show, is said to have sent a notice to the channel for withholding his pending dues.He is no stranger to controversies and he does take them in his stride — unless he has been wronged.Mika Singh was recently thrown out of his ‘special guest’ seat on Colors’ ‘Comedy Nights Live’ for making a friendly appearance on ‘The Kapil Sharma Show’ on Sony TV (remember the infamous fall-out between Kapil and Colors earlier this year?). While the singer isn’t complaining much about his ouster, we hear he wants his pending dues to be cleared.[/tps_footer]