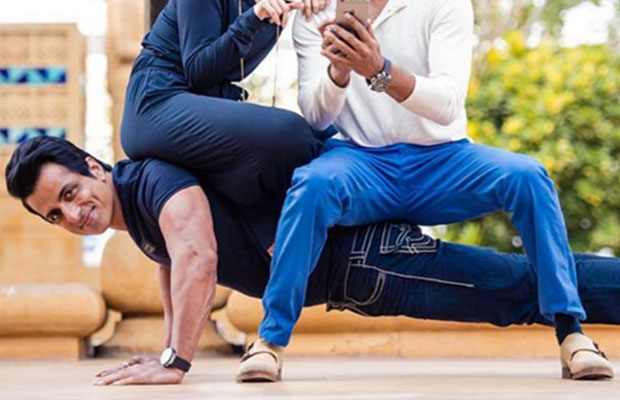 [tps_footer]Abhinetri/Devi(L)  is an upcoming trilingual horror comedy film which will star Sonu Sood, Tamannaah Bhatia and Prabhu Deva. The film has been in the news since the announcement of it. Be it the teaser of the film or Tamannaah Bhatia’s hot dance moves they have maintained to create a buzz.

Monday Morning is supposed to be lazy after such a great weekend but this recent picture of the cast of Abhinetri motivates us to have a great week. Sonu Sood who undoubtedly has an amazing physique did a push up  while taking not only the actress Tamannaah Bhatia on her back even Prabhudeva sat on his back as he was doing a push up that too with a smile. How man?

Sonu Sood so effortlessly lifted the two and managed to smile while getting clicked. Prabhudeva and Tamannaah seem to enjoy their casual conversation while Sonu Sood lifts them up easily without sweating it out.

Have a look at the pretty actress Tamannaah Bhatia who can be seen in a no makeup avatar that blue colour outfit really compliments her fair complexion. Talking about the teaser, the actress dance moves is praised by the critics and for the uninitiated,we will get a chance to see Tamannaah in a double role. Excited?