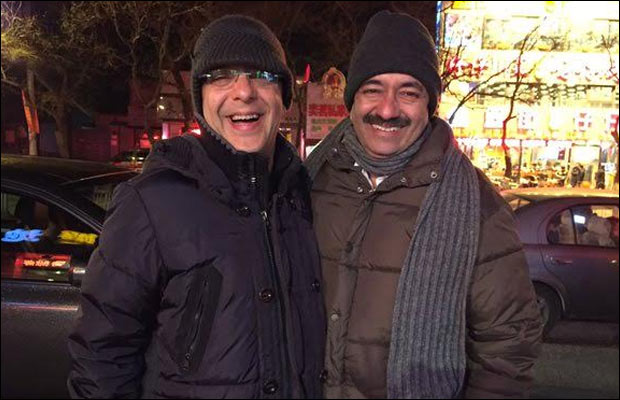 [tps_footer]Rajkumar Hirani who’s all geared to release his first produced venture, Saala Khadoos has begun paying a tribute to mentors.

Saala Khadoos, a term which is used to describe a mentor/ coach in ones life who identify hidden potential and push them to excel.

After posting his picture with his life’s Saala Khadoos (mentor) Vidhu Vinod Chopra, Raju Hirani has been tagging other actors on social media asking for their life’s Saala Khadoos. Raju wrote,”Here is #MeraSaalaKhadoos who inspired & pushed me to the limits. Pix from Munnabhai Mbbs”

The films lead actor, R Madhavan further took the campaign further by posting a picture of himself with Kamal Haasan who he termed as his Saala Khadoos. Madhavan said, “here is #MeraSaalaKhadoos who pushes me to give my best? Who is yours? ”

Ranveer Singh replied by sharing a picture of himself and director Sanjay Leela Bhansali, tagging him as his Saala Khadoos. Ranveer shared, “@RajkumarHirani Sir Ye Dekho! #MeraSaalaKhadoos ! #SanjayLeelaBhansali pushes me 2 excel & brings out the best in me!”

Actress Anushka Sharma shared a picture with her brother Aneesh Sharma and called him her Saala Khadoos. The actress wrote, “@RajkumarHirani Karnesh Sharma who pushed me (still does) beyond what I had ever imagined I could achieve”

The film revolves around Madhavan who is relentlessly pushing his protege, Ritika to overcome obstacles and achieve her boxing goals.

Since the movie is a content oriented sports drama with boxing being the prime focus the actor gained immense information about boxing.

Rajkumar Hirani has casted a real life boxer, Ritika Singh in the lead role in the movie.