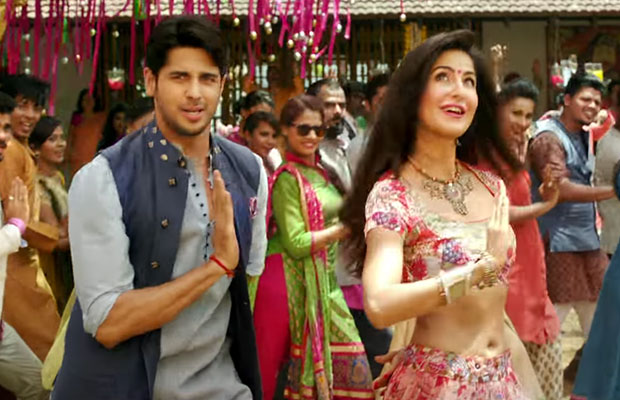 [tps_footer]Katrina Kaif and Sidharth Malhotra’s upcoming film ‘Baar Baar Dekho’ is gaining all the laurels for its mind blowing updates. After the hit track Kala Chashma the film is coming up with amazing tunes. Moreover, the trailer of the film was unexpectedly fantastic. Katrina and Sidharth’s on screen chemistry is also being adored by the masses.

Finally, the much-awaited wedding tune from the film has released. Titled as Nachde Ne Saare the song was already lingering in the minds of the masses because of its brief presence in the trailer of the film. The song is undoubtedly going to be the most played wedding track of the season.

Featuring Katrina Kaif and Sidharth Malhotra in decked up avatars the song has catchy Punjabi lyrics. The track is foot tapping to the core and makes you feel all energetic. Nachde Ne Saare sets up a celebration like mood and the song is also a visual treat.

Katrina who is already gaining laurels for her transformed image is again setting the hotness meter high in the song. The diva is seen in a styled lehenga with open tresses. Kat has teamed up her attire with heavy laden accessories. The starlet is dancing her heart out and is giving impressive expressions too.

On the other hand, Sidharth is nailing his presence in the song with his cute gestures and a few steps. The handsome hunk has donned ethnic attire and is playing along with Katrina’s stints in the song.

Nachde Ne Saare is crooned by Jasleen Royal, Harshdeep Kaur, and Siddharth Mahadevan. The lyrics of the song are penned down by Aditya Sharma. ‘Baar Baar Dekho’ is all set to hit the screens on September 9th, 2016.