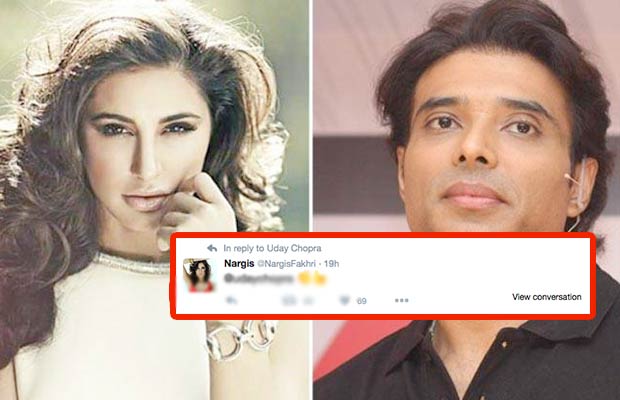 [tps_footer]It’s known to all that Bollywood actors Nargis Fakhri and Uday Chopra were in a committed relationship since a very long time. Recently, reports were doing rounds that things have turned ugly between the two lovers and it is also said that Nargis has left the country in anger. Reportedly, the two have broken up after an ugly tiff between them over their marriage.

While sorts of reports are doing rounds, a day ago, Uday Chopra released an official statement and expressed his disappointment over these rumours. Uday said, “I normally don’t respond to gossip, but the press has been reporting a lot of fiction disguised as fact. I would just like to clarify that Nargis and I have been and still are very close friends. The press has done a wonderful job of creating stories out of thin air and I applaud their creativity. However these are all untrue.”

Uday Chopra also took to twitter where he tagged Nargis and said, “Hey @NargisFakhri remember when I said I don’t respond to gossip. Well, I just broke that rule. Had to do it!”

Nargis Fakhri was quick to react on the same and showed thumbs up to Uday Chopra.

According to reports, initially Uday Chopra was keen to marry Nargis Fakhri but the actress wanted to focus on her career in Bollywood and Hollywood. Later, Nargis changed her mind and wanted to give more space to her personal life. The actress then wanted to marry and settle down but, by the time Uday Chopra changed his mind about getting hitched and this left Nargis shocked and angry.[/tps_footer]