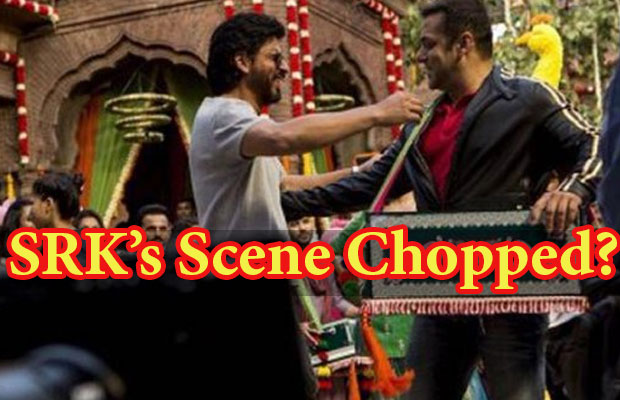 [tps_footer]Salman Khan’s Sultan is definitely the most awaited film of 2016, with Salman being a wrestler and a fresh pairing of Anushka Sharma and Salman Khan is already the talk of the town and both their fans are really excited to see them together. And also sometime back we had seen Shah Rukh Khan on the sets of Sultan and if rumours were to be believed SRK was all set to do a cameo in Salman Khan’s Sultan and both of them had shot for it as well.

When the pictures of the same came out, not only the fans of Salman- SRK were excited, but also everyone from the industry was excited to see them together. The scene for the film was Salman as Sultan will meet a superstar that is SRK in the film. Both were definitely and evidently happy to shoot together and it was evident that they had a gala time on the set together.

But now there is a twist in the story, there are speculations that Shah Rukh Khan’s part from Sultan has been chopped off! While some reports say that SRK didn’t like the whole scene and hence that scene was kept on hold, while some say that the whole cameo was dissolved since Aditya Chopra was against it. Whatever the story is we all wish that our Karan-Arjun come back together for one film and we also hope that Shah Rukh Khan’s cameo is still a part of the film.

Meanwhile,In which remake would you like to see Salman and Shahrukh together? Tell us in your comments below.[/tps_footer]