AIB along with Tanmay Bhatt has been facing rage from people since they posted a meme on PM Narendra Modi!

The comedy group All India Bakchod, popularly known as AIB among masses, seems to be a dear friend of controversies. Every now and then, the comedy group is known to hurt the sentiments of the people with their posts.

It was last year only when AIB had invited lots of flak because of one of its founders. Tanmay Bhatt had roasted the legends Sachin Tendulkar and Lata Mangeshkar, which did not go quite well with people. He was criticised a lot for the act.

But it seems that they haven’t learnt any lesson from their past mistakes. It was on Wednesday when Tanmay had tweeted a meme which showed Prime Minister with Snapchat’s dog filter. Also, in the caption was used the hashtag ‘#Wanderlust’, which, we assume, was targeting at Modi’s frequent foreign visits. 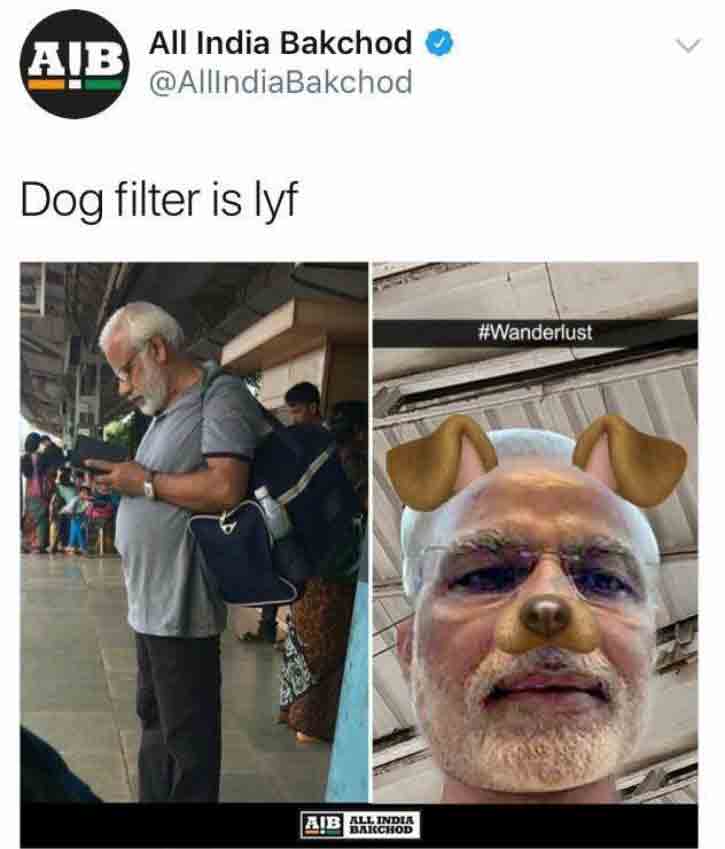 Although, he deleted the post soon after seeing the outrage of the people. But we guess it was too late by then.

A Twitter user Reetesh Maheshwari reported the tweet to the Mumbai Police seeking legal action against the comedian. And as a result, an FIR has been filed against Tanmay on the charges of defamation (IPC section 500) and publishing/ transmitting obscene material in electronic form (Section 67 of IT Act).

Tanmay was summoned to the police station where he gave his statement. He was recorded saying that he had only posted the tweet in a spirit of comedy. He also said that his intention was not to offend anyone.

There are still many people coming out either supporting AIB or criticising them. Tweets about the same have been flowing in since then. But what is going to be interesting is to see what this FIR leads to!

Please don’t share this Image of Narendra Modi in Snapchat Dog Filter. FIR was filed against AIB for this. Don’t RT this and spread it pic.twitter.com/ZWKDWyrpQB

Bhakts lodged an FIR against AIB for making meme on Modi

In short, they are pro and against the people famous for their roast at same time

Why no FIRs for using ‘India’ in AIB and also tricolor in its logo?
Let’s take offence guys!