Govinda seems to be not at all happy with Ranbir Kapoor and Anurag Basu. His cameo role from Jagga Jasoos has been chopped off!

Bollywood’s ex-couple Ranbir Kapoor and Katrina Kaif are going to be seen sharing screen spaces together in the upcoming film Jagga Jasoos. The film is a musical adventure romantic comedy, whose trailer and songs have been loved by the audience.

A few days ago, some pictures of Govinda had surfaced on the internet seeing him in a yogi baba look. Those were actually the stills from ‘Jagga Jasoos’, which revealed that Govinda had a role in the film.

But it was later at an event that the director Anurag Basu cleared things. He talked about how Govinda’s scenes could not be retained in the film. And now it seems that Govinda is not at all happy with them! In a series of tweets, Govinda has lashed out at Ranbir as well as Basu for the same.

He wrote, “I gave full respect to Kapoor family I did the film because he is my seniors’ son I was told I will get the script. I was told they will narrate the film in South Africa and I didn’t even charge my signing amount made no contracts. I was unwell and on drips but still, I travelled to South Africa and did my shoot.”

He went on saying, “There were various negative stories and negative articles only for GOVINDA and that’s how the film was remembered for 3yrs. I did my job as an actor and if the director is not happy it’s completely his call.” 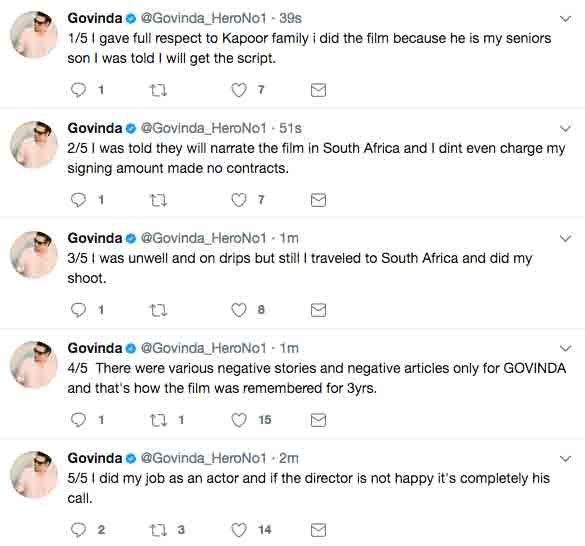 Well, it will be interesting to see if the makers or the actors have anything to say on this!

‘Jagga Jasoos’ starring Ranbir Kapoor and Katrina Kaif, is slated to release on July 14, this year!