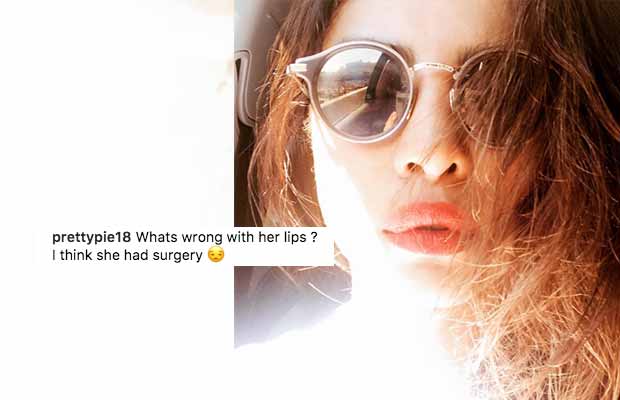 Priyanka Chopra has been criticised for allegedly getting another lip job done!

The Bollywood actress turned international icon Priyanka Chopra is surely soaring high with her career. But the actress has not been having a really good time with the Indian fans.

There have been several instances in the recent past where she has been trolled badly by her followers. First for her meeting with PM Narendra Modi in Berlin wearing a short dress and sitting cross-legged in front of him. Then for her selfie with her brother at the Holocaust Memorial which was not taken very well by the people.

She was recently criticised for allegedly getting a nose job done when she had posted a selfie on her Instagram account. The actress has posted another selfie captioning it as, “Summer lovin… #carfiesunday”

The picture looks all fine except for the actress’ lips which are looking more swollen than usual!

We guess something went wrong with this picture as well. Her followers have started guessing that she has got another lip job done and hence have started trolling her for the same.

Check out some of the comments on her picture…

Earlier also, Priyanka had been reported to get several cosmetic surgeries done, but she had denied all such reports!

Cosmetic surgeries are nothing new in the Bollywood industry. Actresses like Kangana Ranaut, Kareena Kapoor Khan, Anushka Sharma, Shilpa Shetty Kundra, Sridevi and many others are believed to have gone under the knife to enhance their beauty.